Will the cubicle make a comeback? Linda Nazareth in The Globe and Mail 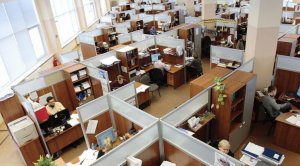 Many companies will no doubt encourage employees to work from home where possible, and others may try to procure larger office spaces so workers can spread out. Over the longer term, however, cubicles may be the choice of many companies, writes Linda Nazareth.

Cubicles are having a moment. Oh sure, they are the butt of jokes, the inspiration for television comedies about the losers that inhabit them, a throwback to an era before hip, open work spaces where everyone drinks lattes and shares brilliant ideas. That may be so, but cubicles have a superpower than open plan offices do not in that they can help stop germs from spreading and sickening workers. For the moment, and maybe for a long moment, that alone is likely to herald the return of the cubicle.

As workers return to offices following the pandemic, one major challenge will be how to prevent outbreaks of COVID-19. The way that office configurations can contribute to outbreaks was made abundantly clear by a March study out of South Korea that showed the way that the virus spread in an open-plan call centre. Of the 811 employees at the Seoul office studied, 97 tested positive of the virus, with 94 of those infected working on the same floor and 79 working in the same section. Even in the absence of hard data on exactly how the virus spreads through aerosols, the results give yet more reason to want to have some space between you and your co-workers, making a wall sound even better.

Cubicles have a long and interesting history. They seem to have their origins in a German design group called Quickborner, which in the 1950s sought to break up the open offices of the time (used for clerks and the like rather than management) by using partitions. Then, in the 1960s, the U.S. office furniture company Herman Miller came up with something called the Action Office, which started with a system that let companies choose some features, such as desk heights, and then quickly transformed into cubicle farms. Over time, they became in vogue for everyone, including managers and professionals. At some point the original designer for Herman Miller became disillusioned about what he had created, calling it “monolithic insanity,” but by then the monolith was out of the bottle and companies loved the Lego-like functionality of cubicles.

As much as cubicles seemed to be cost-effective and efficient enough, they had their drawbacks. Visually unappealing to start, by the 1990s they became thought of as uncool and a drawback to the free sharing of ideas, or at least that is how the popular narrative goes. Perhaps even more so, companies realized that it was even cheaper to put everyone into a big open space and forget the walls all together. Led by tech companies, that is what has happened over the past couple of decades as a “co-working” vibe has taken hold.

Unfortunately, working openly and collaboratively together has tended not to have the results that many companies might have dreamed of. A 2020 study by iQ Office, a co-working company, found that as of 2020 close to 60 per cent of Canadians said that distractions at work caused them to lose up to two hours of productivity every day, with nearly half of those surveyed blaming noisy open-concept offices for the distractions. Even more discouraging is a 2018 study by Harvard professors Ethan S. Bernstein and Stephen Turban that showed that open plan-offices result in 73 per cent fewer face-to-face interactions and a 67-per-cent increase in e-mail interactions. That seems counterintuitive, but apparently having your colleagues literally in your face all day makes you go to great lengths to avoid interacting with them more than you have to. Other studies have shown that open-concept offices lead to more staff turnover, more employee conflicts and even negative health outcomes.

If companies were in no hurry to deal with the issues of open-plan offices before the pandemic, the realization that the stakes have been raised is likely to make them do so now. Many companies will no doubt encourage employees to work from home where possible, and others may try to procure larger office spaces so workers can spread out. Over the longer term, however, cubicles may be the choice of many companies. After all, officials in Italy are already mulling the idea of plexiglass cubicles on the beach to protect sun-worshipers from spreading germs. In India, contactless cubicles are being developed so that healthcare workers can treat coronavirus patients without coming in contact with them. In contrast, slapping up some walls between office workers hardly seems particularly revolutionary at all.

National Cubicle Day is celebrated on April 28. If you missed celebrating it this year, perhaps you might want to mark it on your calendar for next. By then, you may well have your very own wall at the office to thumbtack it to.

China must be held to account for its illegal COVID-19 coverup: Errol Patrick Mendes, Marcus Kolga and Sarah Teich in Maclean’s