CRTC, Can Con policy are overdue for an overhaul: MLI paper by Sean Speer and Len Katz 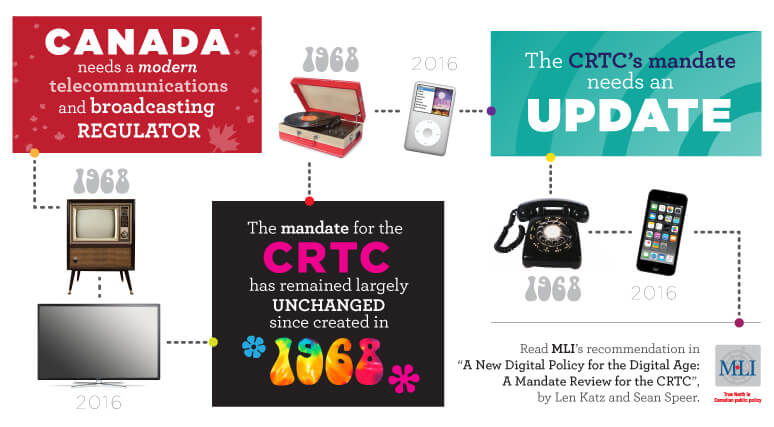 OTTAWA, Oct. 20, 2016 – A new paper from the Macdonald-Laurier Institute is laying out a blueprint for how to turn the CRTC, the regulator of broadcasting and telecommunications, from a counterproductive drag on progress to a leading influence in making Canada a digital innovator.

The CRTC was created to manage the “orderly development” of Canada’s broadcasting and telecommunications sectors in the “public interest”. But it still remains largely the same as when it was created in 1968 – the year Justin Trudeau’s father was elected prime minister.

“The explosion of new technologies, market structures, and consumer expectations has disrupted this quaint vision for the CRTC”, say the report’s authors, MLI Munk Senior Fellow Sean Speer and Len Katz, a telecommunications consultant and former Vice- Chairman-Telecommunications at the CRTC  .

“Its capacity to manage the “orderly development” of Canada’s communications sectors has been undermined by market dynamism and technology enabled disorder”.

To read the full report, titled “A New Policy For The Digital Age: A mandate review for the CRTC”, click here.

The paper, written by MLI Munk Senior Fellow Sean Speer and telecommunications consultant and former Vice- Chairman-Telecommunications at the CRTC Len Katz, points out that we now have more than 28 million wireless subscribers and 93 percent of Canadians are covered by the highest network access speed. Two-thirds of Canadian adults now own a smartphone and roughly half own a tablet. The average Canadian spends roughly 45 hours per month accessing the Internet – the highest usage rate in the world – and rising.

The Internet and its wide range of applications and opportunities has changed the landscape and yet Ottawa’s digital policy and legal framework has failed to keep up. The result is that the CRTC’s regulatory decisions have often become inconsistent, heavy-handed, and counterproductive. Regulating how much Canadian content is shown on traditional over-the-air television when Canadians are spending roughly one-third of a day per week watching Internet-based content, for instance, seems like a losing battle. Now is the time to update federal digital policy for the digital age.

This MLI study sets out a blueprint for a new digital policy and legal framework that reflects today’s economic and technological environment. The goal is to establish a digital roadmap that shifts the CRTC’s focus from protectionism to a confident, positive vision for the digital economy based on market forces and a responsiveness to consumer demands.

The study sets out the following policy recommendations to achieve these objectives: