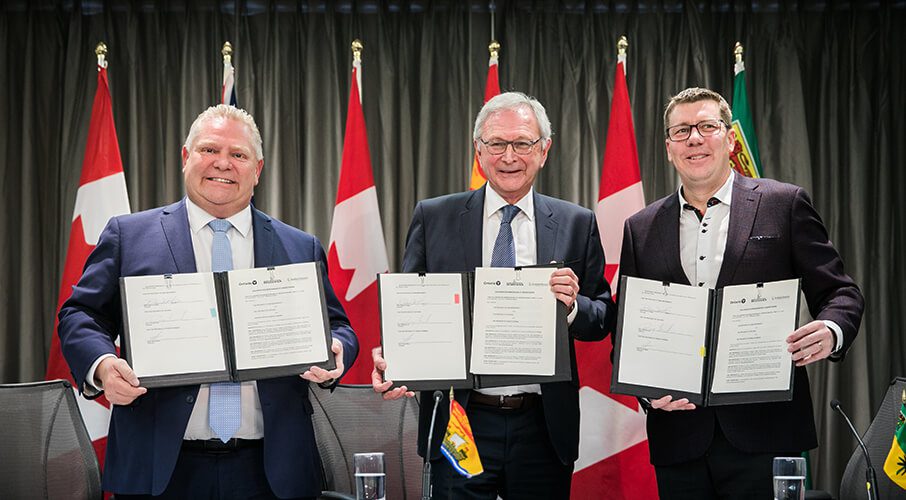 We may be witnessing the dawn of a new era in both clean energy innovation and a genuinely pan-Canadian climate policy, writes Jeremy Rayner.

Canadians might be excused for missing the significance of the December 1 announcement by Premiers Ford, Higgs and Moe that their three provinces would cooperate to develop Small Modular Reactors (SMRs) in Canada.

Readers of Inside Policy have at least been made aware of the technology and its potential thanks to an insightful piece by Duane Bratt posted earlier this year, which rightly stressed the critical contribution that SMRs can make to decarbonizing electrical power production.  But the natural tendency to think that the novelty of SMRs lies in their size – the “S” in SMR – has clouded our thinking about them for too long. The real innovation is their modularity. Understanding the governance and policy challenges posed by modular reactors is urgently needed.  Without that understanding, we’ll miss the significance of Sunday’s event.

What do we mean by modular reactors?  A recent National Post piece on SMRs focuses on one important aspect of modularity – the idea that a number of smaller reactors could be put in place on the same site and linked up to replace a single large reactor or any other kind of power generator.

Why would anyone want to do this?  After all, nuclear reactors have steadily increased in size and output over the last half century because they are very expensive to build and the business case for them depends on capturing ever greater economies of scale.  However, as reactors became larger, their costs increased dramatically and the technical challenges of finding sites, getting regulatory approval and project management means that most recent builds have seen huge delays and cost overruns, calling the future of nuclear energy into question at exactly the time we most need it to tackle climate change.

SMRs are intended to break out of this trap. They would be quick to build, fit smaller sites, be more flexible to configure, and are well adapted to an era where we may expect to see falling energy demand if energy efficiency initiatives actually work as intended. They are especially practical for smaller jurisdictions.

But how will they make money? This is where the other, more important meaning of modularity becomes important.  SMRs are intended to be built from modular components that can be made in factories and assembled quickly on site.  In the case of very small modular reactors, the whole assembly is intended to be made in one place and shipped to site, possibly already fuelled. Economies are achieved not by the size of the reactor but by the length of the production run.

Like a new commercial airplane, the large upfront costs of research and development, licensing and demonstration, will be recovered as unit costs fall over time. If this doesn’t happen, SMRs will be remain where they are today: a handful of military surplus units actually in operation and few demonstration models in universities and research parks, footnotes in the history of energy innovation.

This is the real significance of the Premiers’ announcement.

Canada is a relatively small market in a globalized world.  The history of commercial airplane and automobile production shows us exactly where SMR production will tend without thoughtful and proactive governance and policy.  The announcement is a signal to vendors that here is a pan-Canadian market for SMRs.

Even more important, it lays the foundation for cooperation to choose a small number of designs, with a good mix between larger and smaller SMRs and traditional and innovative technologies. Modularity means that it’s perfectly possible for some components to be made in Saskatchewan, others in New Brunswick and the whole assembled in Ontario, or any other combination and permutation. Airplane manufacturers like Airbus have perfected this kind of construction and much of shipbuilding in smaller and older yards now operates on this principle to build large modern vessels. It doesn’t take a great deal of imagination to see how SMRs might revitalize several older manufacturing sectors currently in distress while creating some entirely new ones.

None of this will happen without an almost unprecedented degree of cooperation between interested provinces, who control their own power generation policies, and between those provinces and the federal government, which retains exclusive jurisdiction over nuclear matters in Canada.  If ever there was a time to prove that this level of cooperation is possible it is surely now and here is the issue on which to do it.

Congratulations to Premiers Ford, Higgs and Moe and here’s hoping that December 1, 2019 will be remembered as the dawn of a new era in both clean energy innovation and a genuinely pan-Canadian climate policy.

Jeremy Rayner is a professor at the Johnson-Shoyama Graduate School of Public Policy, University of Saskatchewan.