COVID-19 Vaccine – Waiting for the Needle: Ken Coates in the Epoch Times 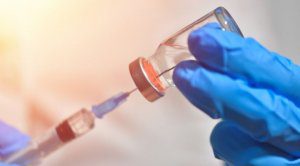 Far from a season of joy and celebration, Christmas 2020 could well be one of recriminations and frustration that the Government of Canada could not deliver the desired seasonal gift of a readily accessible vaccine, writes Ken Coates in the Epoch Times.

When I was in elementary school, students viewed the arrival of vaccination day with great trepidation. Each year, more than a few kids broke down in tears at the prospect of being stuck with a needle in front of classmates. In 2020, the year of pandemic, the fears of the distant past have been replaced by an urgent desire to get the needle. Canadians want a vaccine and they want it now.

This past week, in one of the most fraught and disappointing twists in a year of depressing news, Prime Minister Justin Trudeau announced that Canada’s millions of vaccine doses on order with a variety of suppliers are not due to arrive until well into the new year. On Nov. 7, the prime minister indicated that more than half of Canadians should be inoculated by September 2021 “if all goes well.”

To put it simply, this is not what people expected.

As a result, the government’s announcement was greeted with considerable shock.  The United States is talking about distributing vaccines for those at greatest risk as early as December 2020. The United Kingdom, Australia, Germany, and other countries are capitalizing on national production capacity to get vaccines into distribution within the next two months.

The prospect of Canada wallowing in what we hope will be the tail end of the second wave of the pandemic while other countries experience a vaccine-inspired return to normality is truly deflating. It raises questions that the government will have to contend with in the coming weeks and that the Liberal Party may carry well into the next federal election.

Canadians are already wondering aloud how the government mismanaged this file so profoundly. We were told months ago that millions of doses had been ordered. It was a key part of the mid-pandemic sense across the country that Ottawa had matters well in hand. That early reassurance has now turned to frustration, and government explanations to date have been greeted with disbelief.  Trudeau’s effort to deflect criticism for the absence of Canadian production facilities to the government of former Prime Minister Stephen Harper is one of the more unfortunate examples of COVID-era partisanship.

Consider the optics of the situation. New Zealand, a small, smart nation that managed the pandemic exceptionally well, is operating more or less as normal. Much the same is true of South Korea, Vietnam, and Taiwan. Canadians will not respond well if, in the early months of 2021, we remain under tight restrictions, with few public events amid regional lockdowns, while many other major parts of the world return to pre-pandemic activities. It is bad enough to learn Canada is being left behind; it will be much worse to be reminded of shortcomings in government planning on a daily basis.

There may be some benefit in being behind the vaccine curve, although this is not part of the plan. The opportunity to observe the delivery of vaccines in other countries could provide valuable insights into public response to vaccinations, the effectiveness of the treatments, the willingness of people to get the second injection, the effectiveness of the vaccines, and potential side effects. The world will be watching the rollouts. Canada could be a beneficiary of the collective international learning.

The political challenges for the Trudeau government are substantial. Through the summer of 2020, Canadians rated the government’s response highly, largely because of the expenditure of vast sums of money to protect individuals, families, and businesses from financial crises. In the second wave, the prime minister has largely stepped out of the public view and is leaving the management of the health crisis to provincial governments. The sense that Canadians were all in this together has fractured, now reflecting the shortcomings rather than the strengths of federalism.

The money-driven confidence of Canadians in the federal government had already started to wane before this latest news about the vaccine. The realization that the government has spent more, on a per capita basis, on the pandemic response than almost all other nations is sinking in. The likely announcement of billions more in deficit spending on economic stimulus could actually backfire politically, reinforcing the public’s awareness of the Trudeau government’s spendthrift administration.

Frustration will almost assuredly increase as the reality of being left behind on the vaccine train settles in. Canadians are understandably tired of the painful and exhausting pandemic and were looking forward to the arrival of the vaccine. That the government does not have the vaccine ready to go within the coming weeks will only add to the nation’s distress.

Canada is heading into a Christmas season that may be marked by social distancing and rigorous enforcement of COVID regulations. Far from a season of joy and celebration, Christmas 2020 could well be one of recriminations and frustration that the Government of Canada could not deliver the desired seasonal gift of a readily accessible vaccine.

Ken Coates is a senior fellow at the Macdonald-Laurier Institute and the Canada research chair in regional innovation at the University of Saskatchewan.