John A. Macdonald, The Indispensable Politician 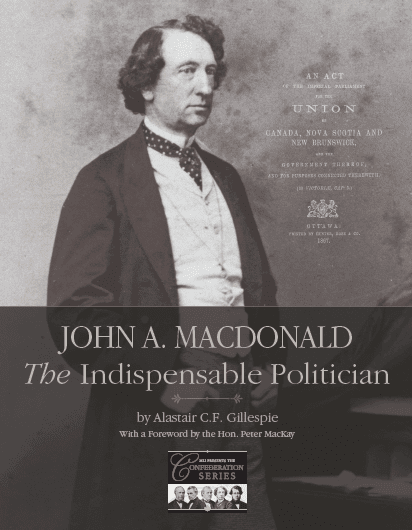 John A. Macdonald, The Indispensable Politician

A practicing lawyer, John A. Macdonald first entered politics at the local level as alderman on the Kingston Town Council. He entered provincial politics representing Kingston in the Legislative Assembly of the Province of Canada in 1844. He played a noteworthy role forming the 1854 Liberal-Conservative political alliance, a precursor to the modern Conservatives, setting a pattern of useful compromise and coalition-building that would characterize his career.

Macdonald was joint premier of the Province of Canada, alongside first Étienne-Pascal Taché and later George-Étienne Cartier (1857-62), often confining his chief Upper Canada rival George Brown to opposition. Strategically, Macdonald was fighting a rearguard battle in Upper Canada, kept in government for long periods by his alliance with Cartier, but with his support increasingly undercut by the insurgent Reformer George Brown, with his demands for representation by population.

A politician known for his adaptability, Macdonald for years had resisted Brown’s calls for constitutional change, favouring an incrementalist approach waiting for “ripeness” of the question and the prospect of cross-party agreement. After the collapse of Macdonald’s brief and final party-led Union government of 1864, Macdonald readily accepted Brown’s offer of support to form a coalition government pledged to reform the constitution. Macdonald successfully negotiated a coalition agreement with Brown, pledging his government to seek a federation of all the British North American Provinces or, if unsuccessful, a federation of Upper and Lower Canada alone.

Macdonald would play an important – perhaps the central – role in the Charlottetown, Quebec and London conferences leading to Confederation in 1867. He was the principal author of the Quebec Resolutions that formed the basis of Confederation. “Macdonald is a sly fox,” wrote another Father of Confederation from London. “He is well-briefed, subtle, adroit and popular. He is the man of the conference.”

Although famously voting against the Brown Committee’s recommendation of a federal solution to Canada’s political problems, Macdonald’s speech in the Confederation Debates was that of a convinced federalist, if one favouring a strong central government. Although a legislative union would have been stronger, and cheaper and better, French-Canadians would never have consented to it, Macdonald explains. Unlike the United States, gripped by a terrible civil war, its constitution undermined by the idea of state sovereignty, Macdonald declares Canada must “strengthen the Central Parliament, and make the Confederation one people and one government, instead of five peoples and five governments, with merely a point of authority connecting us to a limited and insufficient extent.”

Yet Macdonald’s centralist views should not be overstated. In 1858 he had accepted federation of British North America as government policy, and in 1861 had reaffirmed his support for Confederation in his election address, writing that if Canada was to “succeed in a Federation” it must also secure an “efficient central government.” Macdonald spoke of Canada finding the “happy medium,” securing “all the advantages of a legislative union under one administration, with, at the same time the guarantees for local institutions and for local laws, which are insisted upon by so many.”

As Canada’s first Prime Minister until 1891, Macdonald presided over Canada’s expansion to the Pacific, and the accession to Canada of Prince Edward Island, Manitoba, the North-West Territories (Saskatchewan and Alberta), and British Columbia.

For more on Macdonald refer to the Dictionary of Canadian Biography.

The Macdonald-Laurier Institute is pleased to showcase the fifth paper of its Confederation Series, written by Munk Senior Fellow Alastair Gillespie.

This paper examines John A. Macdonald’s role as the indispensable politician who made Confederation possible. Many had dreamed of Confederation, others had long fought for constitutional reform, but only the resourceful Macdonald managed to achieve it through an extraordinary coalition deal – making his record an elegant defence of the importance of good practical politics in delivering real change.

Sir John A’s defenders are fighting back: Patrice Dutil in the Toronto Sun

Speaking for Ourselves – Shuvaloy Majumdar on Tonight with Jamil Jivani

John A. Macdonald Under Criticism: David Kilgour for Inside Policy

Sir John A. Macdonald Is Owed Our Thanks — Not Our Derision: Brian Lee Crowley

In Defence of Sir John A. Macdonald: Brian Lee Crowley

Tearing Down Sir John A. Macdonald’s Statue Is Not Reconciliation: Brian Lee Crowley

John A. Macdonald, Speech to the Banquet in Honour of the Provincial Administration, March 1, 1866

Pod Bless Canada Ep. 6 – Canadian History and the Political Uses and Abuses of Memory with Crowley and Patrice Dutil