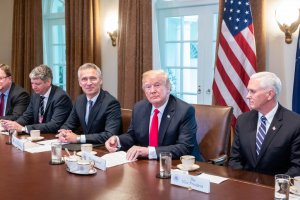 OTTAWA, ON (October 2, 2018): Canada has a key role in NATO’s defence of the Baltics. In 2017, it had taken up the leadership role as the Framework Nation of NATO’s Enhanced Forward Presence (eFP) Battlegroup in Latvia. Immediately prior to NATO’s Brussels summit in July 2018, the prime minister also renewed Canada’s commitment to Latvia for four years – more than half a year prior to the expiration of the existing mandate – and increased the size of its deployment to 540 troops.

Such actions show the country intends to sustain its leadership in this crucial mission. Yet, as noted in the new commentary by Munk Senior Fellow Christian Leuprecht, Joel Sokolsky, and Jayson Derow, the biggest uncertainty remains whether the Trump administration will disengage from Europe.

As they note, President Trump “could lose interest in the Baltics and the eFP entirely, declaring that it is a European problem, and thus should be dealt with by the Europeans. Such disengagement would be in keeping with what the authors see as a major shift in US foreign and defence policy towards the “pre-World War Two status quo ante.”

Canada’s decision to renew its commitment to the NATO mission in Latvia certainly conveys to Russia that it will continue to face costs if it opts to undertake adventurism in the Baltics. But it is also directed at the White House, which has recently complained about the lack of defence spending among NATO allies.

Alongside Germany and Italy, Canada has long maintained that “what counts is not some arbitrary, hard to count, inconsistently applied measure of the portion of national wealth devoted to defence spending, but capacity, capability, and commitments to NATO’s collective defence posture.” By renewing its commitment to Latvia, Canada has only reinforced this message. Indeed, according to the authors, this decision is also meant to forestall the possibility that the US may disengage from Europe.

Canada wants to make sure the US recommits as the eFP framework nation for Poland and stays the course on the European Deterrence Initiative,” write Leuprecht, Sokolsky, and Derow.

This commentary extends the analysis of the author’s recent MLI report, titled On the Baltic Watch: The Past, Present and Future of Canada’s Commitment to NATO’s Enhanced Forward Presence in Latvia.