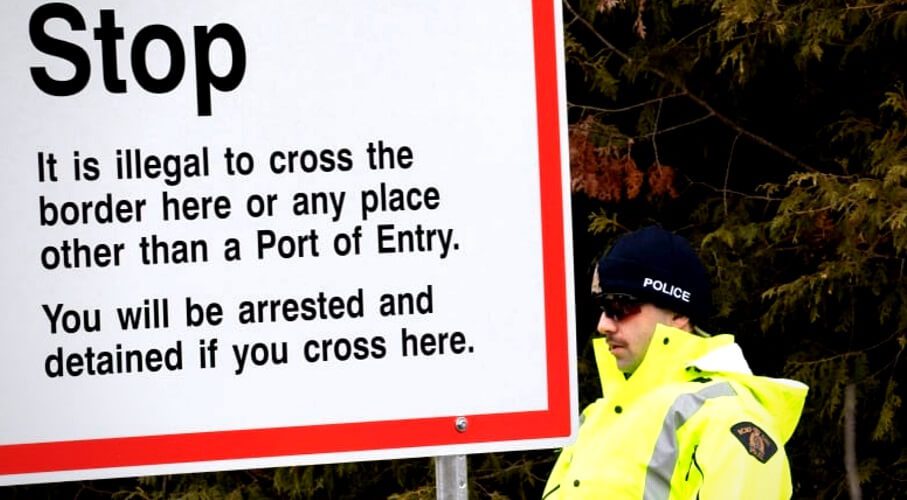 Alarmed at the erosion in public confidence in the immigration system that their own complaisance and complacency helped engender, Ottawa is now trying to project an image of stern defender of the border, but so far it is image over substance, writes Brian Lee Crowley.

Yes, Canada would be right to tighten its borders, particularly with respect to those who have been entering Canada illegally. Unfortunately, while the government is making noises that it wants to do so, there is little evidence that those measures will be effective.

Let’s begin with why it would make sense to toughen border controls. Canada’s highly successful postwar immigration policy, supported by an all-party political consensus and public opinion, has never been laissez-faire about who gets in. On the contrary. That admirable policy has always been premised on the idea that Canada decides who gets into the country and the selection process be carried out in a disciplined and orderly way.

Since the election of the Trudeau government in 2015, however, that supportive public consensus has been seriously undermined. First was the discovery that would-be immigrants could exploit a flaw in the law regarding people wishing to claim refugee status in Canada. The law is premised on the sensible notion that refugees should make their claim for status in the first safe country they arrive in. Canada, like the rest of the civilized world, sees the priority with refugees being their safety, not their ability to shop around for the country they would most like to live in.

Since the bulk of refugee claimants arriving in Canada did so via the United States, not directly from other countries, we had negotiated a Safe Third Country Agreement (STCA) with Washington. It ensured that refugee claimants attempting to enter Canada from the U.S. would be turned back on the grounds that the U.S., a country with a sound process for assessing refugee claims, is where their claim should be made.

Some clever person worked out that this rule could be avoided simply by crossing the border illegally, since there exists no mechanism under the STCA for returning refugee claimants who enter elsewhere than official border crossings.

The second thing that put the reigning consensus under strain was that the illegal border crossers started to arrive at a time when the prime minister wanted to distinguish himself from the anti-immigrant rhetoric emanating from the Trump White House.

Trudeau duly said, in a tweet reported around the world, “To those fleeing persecution, terror & war, Canadians will welcome you, regardless of your faith.…“. The predictable result was tens of thousands of people crossing the border illegally and presenting themselves as refugees when in fact a great many of them were simply queue-jumping economic migrants.

The government’s first response to criticism questioning the wisdom and propriety of this policy was to accuse its critics of racism and wanting Canada to abandon its commitment to fair treatment of refugees. This was questionable on several counts.

First, many of the critics were themselves new Canadians, understandably upset at a weakening of the integrity of an immigration system, which many of them patiently navigated to come to Canada.

Second, it implied that the current official government policy that turned refugee claimants back at official border crossings, was also racist and failed to uphold Canada’s refugee commitments, which was clearly nonsense.

Alarmed at the erosion in public confidence in the immigration system that their own complaisance and complacency helped engender, Ottawa is now trying to project an image of stern defender of the border, but so far it is image over substance.

In the omnibus budget implementation bill C-97, for example, new rules are introduced refusing entry to refugee claimants who have already made their claim in a third country. Since the typical illegal border-crosser at Roxham Road in Quebec is a Nigerian who has made no such claim elsewhere, this change is largely irrelevant to the problem at hand. And lest anyone accuse the government of abandoning its commitment to fair treatment of refugees, remember that the head of the UN refugee agency in Canada says the changes are “no cause for alarm”.

The other step Ottawa has announced is an opening of talks with Washington aimed at changing the STCA so the U.S. must take back refugee claimants no matter where they enter Canada. This would be a real step in the direction of restoring the integrity of the immigration system but Washington’s motivation to help out is low, although that may change as the numbers of people entering the U.S. illegally from Canada is increasing.

Projected talks are a handy election talking point, but we are still far from fixing the damage that has been done to the integrity of the border, especially since the various recent government plans to increase enforcement and other capacities at the border are largely gathering dust. Canada would be right to tighten its borders; so far it has failed to do so.