Why Canada Needs to move Beyond the US-China Rivalry Narrative: New MLI Commentary by Akshay Singh 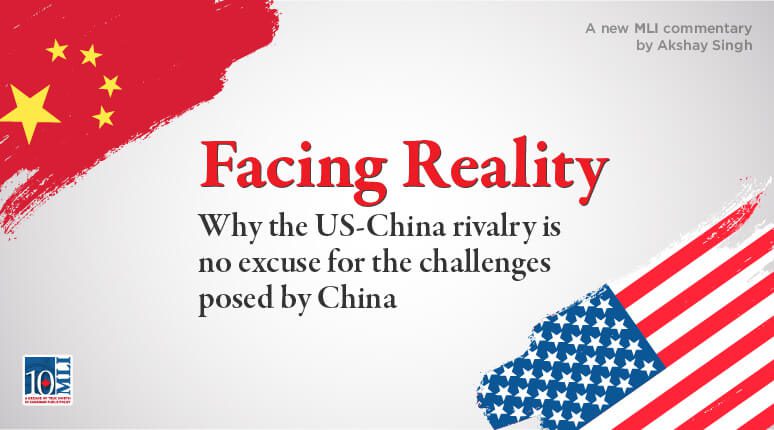 OTTAWA, ON (October 7, 2020): The “China challenge” is often framed within the context of the US-China strategic rivalry. However, this narrative has often been used as an excuse to ignore China’s increasingly belligerent behaviour – in which issues that arise between China and other states are relegated to simply being an outcome of this US-China rivalry rather than being directly attributed to China’s aggressive actions. In such a formulation, affected states are simply de facto battlegrounds for great power politics.

In a new MLI commentary titled “Facing Reality: Why the US-China Rivalry is no Excuse for the Challenges posed by China”, Akshay Singh argues against framing bilateral irritants solely within the context of the US-China rivalry. As he notes, this narrative provides an “out” to ignore the real challenges posed by the People’s Republic of China (PRC).

“Some analysts would like to believe that China does not pose unique challenges to middle powers, and that such challenges would not exist in the absence of US-China competition,” explains Singh.

As Singh writes, according to this logic, middle powers are increasingly being pushed to take sides by either the US or China. This push then leads to increased friction and pain for some of these powers, with certain states being “trapped” between the interests of the US and China, reducing any leverage a state may have. This results to some unsatisfying conclusions:

As Singh notes, “By pushing this narrative, Beijing is able to reframe the debate in simplistic terms in spite of real concerns.”

Moving forward, Canada should refute the simplicity of framing challenges with China through the lens of the US-China strategic rivalry. We need to make choices in a sovereign manner which protects our interests most, and should not be intimidated by accusations that by looking to protect these values they are “anti-China” or “pro-US.”

“In the coming years, middle powers will have to make certain difficult and uncomfortable decisions to protect key partnerships, as well as their own core interests,” writes Singh. “Canada should look to grow cooperation with diverse client bases around the world, thereby potentially mitigating damages caused by short-term retribution for foreign policy decisions that ultimately best serve Canada and its allies.”

Akshay Singh is an international affairs and security scholar and a nonresident research fellow at the Council on International Policy. He holds an MA and BA from Simon Fraser University, where he focused on political science, history, and international security issues