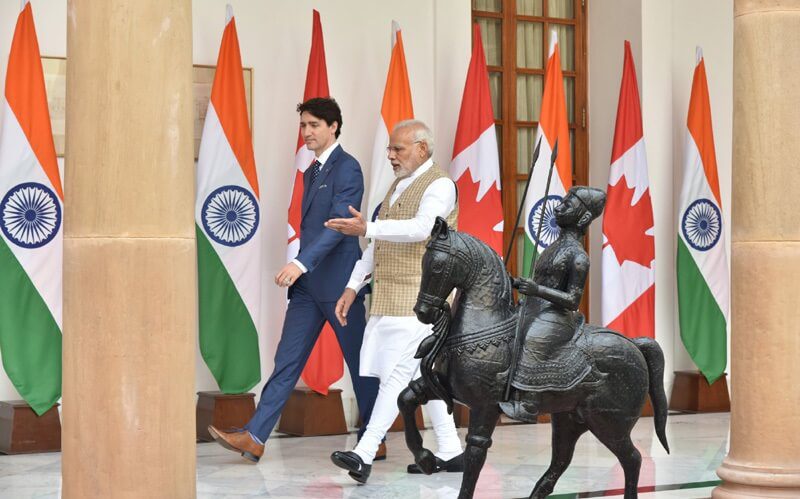 Canada and India need to strengthen institutional, people-to-people, and parliamentary relations. It is time to break from the shackles of the past and build a relationship that will cement our status as natural allies, writes Vijay Sappani. A shortened version of this article appeared in the Toronto Star.

As 2020 comes to an end, it is a good time to take stock of Canada’s standing in the world. Obviously, the year has been challenging for Canada, having failed in its UNSC bid, facing coercion from China, and more. But with emerging challenges also come opportunities for new alliances and partnerships. For instance, the world has realized that China poses the biggest threat to global stability. India, on other hand, could hold the key to global stability and economic progress in the region and beyond.

In this context, Canada and India are two vibrant and pluralistic commonwealth democracies that have all the ingredients to be durable global partners. However, scratch the surface and what emerges is a historically weak relationship.

India and Canada had a cordial relationship in the first few decades of India’s independence, but since the mid-1970s a series of events resulted in a lack of trust in security that has impacted bilateral relations even until today. Key among them is the Pakistan-backed Khalistan separatist movement thriving in Canada and its support among few Canadian politicians.  The Air India bombing of 1985 also casts a gloomy shadow on Canada-India relations.

Today, 35 years after the Air India terror attack and ten years after the release of the Justice John Major Report, the level of security co-operation between these two democracies remains abysmal. Decades of mistrust exists at all levels of decision-making in both countries. Precisely because of this, Canada and India need to put greater emphasis on improving a bilateral security relationship which will pave the way for improved trust and engagement.

But both countries need to do much more to bring the bilateral relationship to a point where they regard each other as natural allies. A National Security Advisor (NSA)-level dialogue was initiated by the Harper government and continues to this day. It now needs to deliver something more meaningful, with a focus on deeper institutional-level collaboration on bilateral, regional, and global security issues. The Canada-India Joint Working Group on Counterterrorism also shows the importance both countries attach to addressing terrorism.

As a confidence-building measure, both countries need to prioritize and address the issue of Pakistan-backed Khalistani separatists with a clear resolve. This can single-handedly help build trust between the security agencies and lead to greater bilateral relations. The US-India style 2+2 Ministerial dialogue and a dedicated hotline needs to be pursued between the foreign and defence ministers of Canada and India.

In the coming years, China needs to be a key focus. India is emerging as a dominant player for security partnerships with both our NATO and Asian allies, with a growing emphasis in 2020 on countering China.

The navies of Canada and India have conducted anti-piracy patrols in the Gulf of Aden for over a decade. Joint patrols and expanded naval exercises in Indo-Pacific waters should be a priority; this should include not only India but other members of the Quadrilateral Security Dialogue, such as the US, Australia, and Japan. Further and deeper cooperation in defence is needed. Canada should expand arms sales and joint ventures with our NATO allies to support India in high altitude warfare, which would improve its ability to counter terrorists from its west and China’s belligerence in the east.

Cybersecurity is another area which both countries have identified as a point of collaboration. 2020 presents the right reasons for our democracies to invest in deeper relations and joint programs on cyber security threats faced by our nations.

Canada and India need to strengthen institutional, people-to-people, and parliamentary relations. The lack of a Canada-India Parliamentary Association hampers a reliable and robust vehicle to build relations between Members of Parliament of both countries.

Canada and India share values of freedom, justice, human rights, commitment to the rule of law, and a Westminster-style parliamentary system. We can have one of the strongest people-to-people bonds. In a new world order where the threat of China’s economic might is acutely palpable, it is time to break from the shackles of the past and build a relationship that will cement our status as natural allies.

Vijay Sappani is a board member for the Macdonald-Laurier Institute and several other Indo- Canadian institutions.

As work goes remote, the whole world may soon compete for your job: Linda Nazareth in the Globe and Mail