Canada has work to do in helping to ease refugee crisis, Leuprecht tells TVO 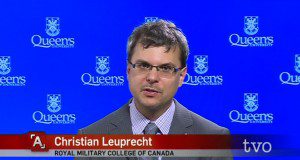 “Canada does (do) its share but…in this crisis there is likely the potential to do more based both on our population base and our economic capacity”, he said.

Leuprecht also says the military presence in places like Syria, where the conflict has created a large number of refugees, is helping to stem the refugee crisis.

However, he adds, any long-term solution needs to be political in nature.

”We can only hope that, as there’s intensified pressure, we will get that sort of effort on the ground because there is no military solution; it has to be a political solution in the end”, he told TVO.

Leuprecht also authored a column on the subject for the Toronto Sun and was quoted in a story in the Toronto Star.