Campbell and Kingston in Inside Policy: It’s time for decisive action on internal trade 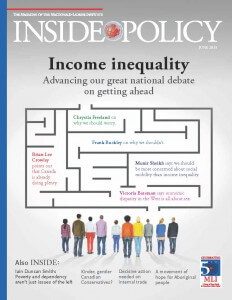 Barriers to internal trade have for too long impeded the movement of goods across provincial borders. In the June 2015 edition of Inside Policy, Ailish Campbell and Brian Kingston establish three priorities for liberating interprovincial trade in Canada.

By Ailish Campbell and Brian Kingston

To ensure Canada’s success in the global economy, we need to increase that second figure. More Canadian firms, large and small, should be selling goods and services beyond our borders.

One way to prepare Canadian companies to become exporters is to give them access to a larger domestic market. We often think of Canada as a single commercial space, but the reality is different: interprovincial trade barriers impede everything from beer to coffee creamers to insurance. Meanwhile, different occupational standards stand in the way of true labour mobility.

If our goal is to increase Canadian exports, a single Canadian market has to be seen as table stakes. Anything less would represent the triumph of protectionism.

Interprovincial trade barriers exist to protect local businesses, yet there is strong support in the private sector for the removal of barriers to internal trade. The challenge lies in securing the political leadership to move forward.

The 2015 federal budget established a new Internal Trade Promotion Office within Industry Canada. The office is meant to function as a hub for research and analysis, including the creation of a new internal trade barriers index. Its staff will engage with counterparts at the provincial and territorial level, as well as other stakeholders, to address barriers and regulatory cooperation.

Industry Minister James Moore has clearly taken a personal interest in this file and deserves much of the credit for keeping up the momentum toward a common Canadian market. But without additional powers, and a faster and more efficient legal process for challenging trade barriers, this new office will be hard-pressed to achieve meaningful progress.

One idea that makes a lot of sense is for the federal government to become the permanent chair of the Agreement on Internal Trade (AIT). That, at least, would ensure some consistency in leadership. But the provinces would never let that happen, so any progress from this point forward depends on the provinces themselves demonstrating leadership.

Unfortunately, the role of chair rotates every year. That makes it next to impossible to maintain momentum.

Last year it was Manitoba’s turn. The province’s jobs and economy minister, Theresa Oswald, made encouraging statements about the need to tear down barriers but a meeting of provincial trade ministers regrettably never materialized.

‎Advocates of reform are pleased that Ontario’s Economic Development Minister, Brad Duguid, has called a meeting in June 2015. Advocates want to see decisive action that engages stakeholders in solutions, rather than yet another discussion.

Right now the western provinces are exhibiting the strongest leadership. Saskatchewan Premier Brad Wall says he supports the concept that “everything is open”, and agrees that the AIT needs more robust enforcement powers. He has the backing of BC and Alberta. All three provinces are members of the New West Partnership Trade Agreement (NWPTA), which goes further than the AIT in reducing barriers.

The big question is whether Ontario and Quebec will join the push for a common domestic market. Combined, these two provinces generate more than half of Canada’s GDP and are home to the majority of Canadian firms.

Lowering provincial, municipal, and other public sector procurement thresholds (such as those established by school boards and hospitals) would strengthen competition and ensure value for taxpayers’ money. Common standards would also counteract the fragmentation of provincial procurement markets, ultimately lowering costs.

Ontario and Quebec have made welcome progress on government procurement. The Premiers recently announced an update to the 2009 Ontario-Quebec Trade and Cooperation Agreement public procurement chapter to align it with the Canada-European Union Comprehensive Economic and Trade Agreement (CETA). While this is welcome progress, all provinces and territories should have the same ambitious government procurement rules under the AIT.

Agri-food and alcohol: Provincial rules surrounding the certification of food products and the transportation of alcohol are inconsistent. Follow-through by provinces to implement the new federal legislation on trade in wine must be a top priority.

One craft beer producer we spoke to said it is easier for him to ship from Ontario to the United States than to Quebec. Antiquated rules and protectionism make no sense at a time when Canada produces a wide variety of high-quality foods and beverages, from producers in every province and territory.

Labour mobility: Skilled tradespeople are in demand across Canada, particularly in the West. Further progress toward harmonization of apprenticeship programs would allow individuals to take new jobs where and when they arise.

Progress is required in many other sectors as well, ranging from insurance to hairstyling to dentistry, where the lack of common Canadian certification standards prevents labour mobility.

The time for consultation is over. The necessary ingredient is political leadership.

Through their recent work on climate change and government procurement, Ontario Premier Kathleen Wynne and Quebec Premier Philippe Couillard have shown that cooperative federalism is alive and well. It is time now for Premiers to show an equal degree of passion for all sectors of the economy in order to allow Canadian companies to sell goods and services to customers across the country.

Ailish Campbell is Vice President, Policy, International and Fiscal Issues, and Brian Kingston is a Senior Associate, both with the Canadian Council of Chief Executives.

Remembering Robert Knox: A champion of economic freedom in Canada

Remembering Robert Knox: A champion of economic freedom in Canada