Why big isn’t bad: Tougher competition policy for ‘Big Tech’ is a solution in search of a problem 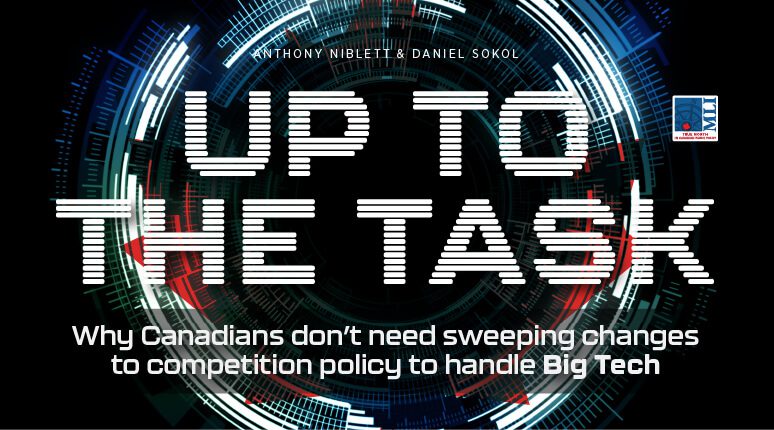 OTTAWA, ON (November 8, 2021): The explosive growth of e-commerce during the pandemic has had tremendous benefits for consumers, but it has also raised concerns about the growing size of major industry players such as Amazon, Google, Apple, Microsoft, and Facebook. Europe and the US have moved to impose antitrust measures and sweeping new competition policies against the titans of tech, and there are calls in Canada to do the same.

Canada’s Commissioner of Competition has pushed for a review of Canadian competition law in light of these issues. However, a close analysis shows that Canada’s competition law and Competition Bureau are, for the most part, up to the task of addressing any real harms or anti-competitive behaviour, and imposing major new regulations could instead inhibit innovation and harm consumers.

In a new MLI paper titled “Up to the task: Why Canadians don’t need sweeping changes to competition policy to handle Big Tech,” authors Anthony Niblett and Daniel Sokol warn that history is replete with examples of how populist efforts to target companies based primarily on their size havebeen to the detriment of consumers.

“Competition law in Canada does not need an overhaul,” write Niblett and Sokol. “Dramatic changes to the Canadian Competition Act are not required to best foster competition in the Canadian economy. Indeed, such changes would likely be harmful.”

According to the authors, much of the push to radically overhaul competition policy is based on the idea that “big is bad,” or that the size of major digital service providers is driving inequality and the erosion of free speech and democracy. “Many of the calls for greater regulation are driven by the desire to address a variety of broader social and political harms that are perceived to be caused by large digital platforms,” write Niblett and Sokol. Competition policy is not and should not be “designed to cure all the ills of society relating to things such as commerce, technology, and employment.”

Practices such as vertical integration – when an organization controls multiple parts of its supply or value chains, including with respect to consumer data – are often cited as inherently harmful to consumers. Yet, vertical integration has generally been found to substantially benefit consumers and foster innovation. In cases where such practices are harmful, the Competition Act and the Canadian Competition Bureau are already capable of addressing them.

Thus, the authors argue that “wholesale dramatic changes – such as those proposed in Europe and the United States – are simply not required” in Canada, and indeed overzealous efforts to reform competition policy could squeeze out small entrepreneurial firms as well.

What can be done? Extra resources for the Competition Bureau to enforce the laws against abuse of dominance will likely have a positive effect, and there are good reasons to think private rights of action and increased penalties would further encourage compliance with the Act.

But sweeping regulations that restrict the vertical integration of digital platforms and affect the ability of platforms to control their data will likely fail to capture the very diverse ways in which digital platforms compete and innovate.

“The focus should continue to be on lower prices, higher quality, and – perhaps most importantly – fostering innovation.”

Anthony Niblett is an associate professor at the University of Toronto Faculty of Law. He also holds the Canada Research Chair in Law, Economics, and Innovation. His background is in both economics and law.

Daniel Sokol is a Professor of Law at the USC Gould School of Law and Affiliate Faculty at the Marshall School of Business.

Canada is a nation adrift in the Indo-Pacific, and that needs to change: James Boutilier for Inside Policy