What big ideas should inform this session of Parliament? New MLI Commentary 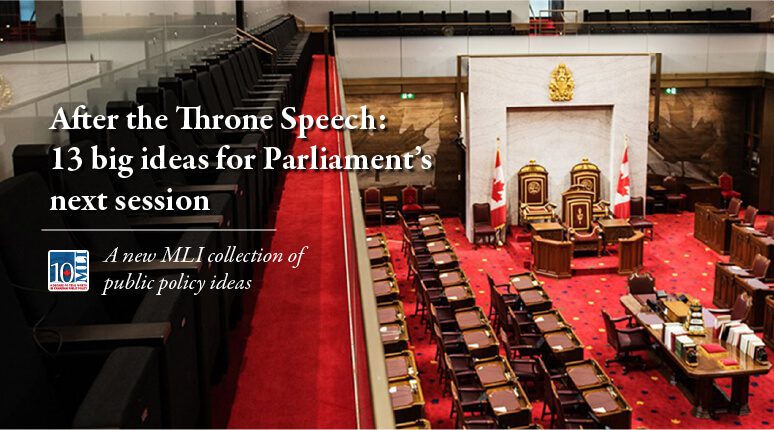 OTTAWA, ON (October 19, 2020): The ongoing pandemic and economic crisis have left Canadians concerned for the future. Many wonder whether the plan outlined in the recent Throne Speech is the right one.

It is clear that policy-makers will need ideas from the best policy minds to aid them in securing a better future for Canadians. MLI’s newest commentary, titled “After the Throne Speech: 13 big ideas for Parliament’s next session,” outlines some of those ideas provided by many of MLI’s fellows, board members and contributors.

Writing on budget priorities, Philip Cross explains that the 2020 budget presents the perfect time for the government to undo a “temporary” measure from a previous crisis, and help employers and workers by spreading out contributions to the Canada Pension Plan and Employment Insurance over the full year. Brian Ferguson outlines why the government should focus on reducing spending and better targeting support for business.

In terms of fostering an economic recovery, Jocelyn Bamford argues that restoring manufacturing is the best move to foster a recovery without spending billions. Jack Mintz suggests that Canada ought to prioritize policies that attract investment, including by reducing regulation. Richard Owens explains that Canada’s economic recovery requires a new and serious approach to innovation.

On foreign policy and security, Margaret McCuaig-Johnston urges the government to develop a strong, new Indo-Pacific strategy that can counter China’s aggression. Furthermore, Richard Fadden believes that the government must start looking to the future today by creating a Commission to investigate Canada’s ability to respond to disruptive events.

Policy-makers would be remiss if they did not consider how remote, Northern, and Indigenous communities have been falling behind the prosperity enjoyed by urban Canada, even in the pre-pandemic period. Peter Menzies argues that expanding high-speed Internet to the North would be an important move to level the playing field. Dan Pujdak expands on this by suggesting that the government develop a Northern critical infrastructure investment plan.

Sharleen Gale notes how a lack of access to capital is stifling Indigenous economic opportunity, and writes in favour of the creation of an Indigenous major projects fund. Theresa Tait-Day speaks to the role of self-governance, explaining that in the case of the Wet’suwet’en people, Ottawa must be willing to engage and consult broadly, not with just a select few Hereditary Chiefs. Building on these themes, Sean Willy argues that, rather than rely on rhetoric, the federal government must commit seriously to real acts of reconciliation.

Importantly, policy-makers in Canada must resist the urge to ‘Americanize’ our perception of the issues that our country is facing. Shawn Whatley argues that this urge to frame our thinking around US headlines reduces our ability to pursue the best policies in Canada.

To learn more about the ideas that our experts and contributors believe should shape the ongoing session of Parliament, read the full commentary here.

Turkey and Russia’s dangerous game in the Caucasus: Kiarash Ighani and Jonathan Berkshire Miller in the Toronto Star

COVID Prevention is Costly: William Watson in the Financial Post

COVID Prevention is Costly: William Watson in the Financial Post