How the Free World Will Respond to Beijing’s Crackdown: New MLI Commentary 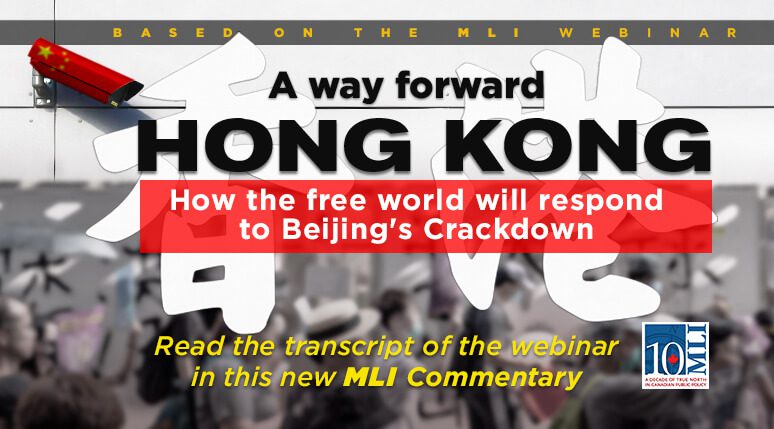 OTTAWA, ON (October 26, 2020): This year has seen a clear escalation of China’s ambitions on all fronts. This is perhaps best illustrated by its betrayal of Hong Kong, as Beijing’s national security law came into effect in July 2020. The Chinese Communist Party had broken its promise to the world and effectively stripped Hong Kong of its cherished rights and freedoms. Now the question remains: how will the Western nations work together to respond?

In a new MLI commentary, titled “Hong Kong – A Way Forward: How the Free World Will Respond to Beijing’s Crackdown,” the world’s leading voices provide their insights on the situation facing Hong Kong and how democratic nations should push back. While Ottawa continues to be inconsistent and weak in response to China’s aggression, the panel provides Canada with clear recommendations on how to move forward.

This commentary is an edited transcript based on a webinar MLI hosted on September 22 in cooperation with Optimum Publishing, Hong Kong Watch and European Values. The webinar generated significant international media coverage, including in the Globe and Mail, Nikkei Asian Review, Voice of America, and in news media in Chinese, Spanish, Vietnamese and more. To date, it has had nearly 14,500 views on Youtube. You can watch the webinar here.

“We’ve seen the biggest assault on freedom and liberty in any city, I think, in the 21st century,” notes Lord Patten of Barnes, former Governor of the British Colony of Hong Kong.

Dr. Miles Yu, the China policy and planning advisor for US Secretary of State Michael Pompeo, states: “all-in-all, the Hong Kong experiment, in my opinion, for the last 23 years, has been nothing but a spectacular flop in history.”

The concern of the Chinese Communist Party isn’t for the welfare of the people, but rather to continue to dominate and hold the power by whatever means necessary. According to Nathan Law, activist and MLI’s Ambassador on Canada-Hong Kong Policy, “political activists and protesters are in grave danger because the national security law allows the Hong Kong government to prosecute them just because of their speeches.”

As the situation in Hong Kong deteriorates, the distinguished panel offered a wide range of ideas on how Western nations should respond to an increasingly hostile China. Some of the ideas include:

On a whole, the panel stresses the importance of the unity of the free world to address the challenges China poses. As we face a new daunting future in Canada-China relations, this will require greater coordination among like-minded countries to bring together both Western democracies and allies in the Asia-Pacific region. It is imperative to have a robust, effective, and united response to China’s aggressive tactics.

“The West has done far too much to accommodate the CCP. But, most Westerners are not actually the ones who have to live with the consequences of this action,” notes Mareike Ohlberg, co-author of Hidden Hand: Exposing How the Chinese Communist Party is Reshaping the World.

“Hopefully today is another sign that people around the world are willing to stand up for Hong Kong, and will listen to those people who have the most in the game, the people of Hong Kong.”

Wokeness – the new religion of the left: Jamil Jivani in the National Post

Wokeness - the new religion of the left: Jamil Jivani in the National Post