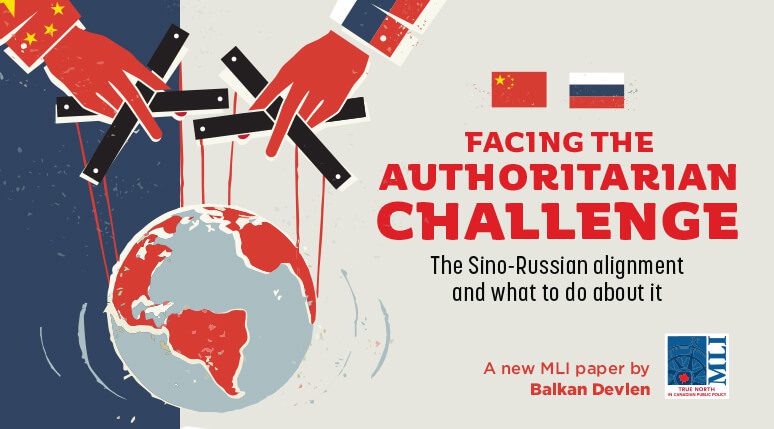 OTTAWA, ON (March 18, 2021): A new challenge is staring down democracies around the world in the form of an authoritarian alignment between Russia and China.

In a new MLI paper titled, “Facing the Authoritarian Challenge: The Sino-Russian Alignment and what to do about it,” MLI Senior Fellow Balkan Devlen explores the foundation behind this growing Sino-Russian alignment. As he explains, the main drivers behind this axis are Moscow and Beijing’s shared neo-authoritarian ideology, focus on regime security, and their belief that the West is in terminal decline.

“As we emerge into a post-pandemic world, Canada and its allies and partners need to have a clear-eyed view of the challenge posed by this authoritarian axis,” writes Devlen.

Both China and Russia believe they need to speed up a shift in global power away from the West and restructure the international order to their liking. According to Devlen, engaging in subversion against the West is a crucial component of this strategy and a natural driver for their alignment.

Devlen explored the Sino-Russian alignment across three domains: defence, democracy and human rights, and cyber-governance. Despite existing and potential differences between the two countries on several fronts, none of their disagreements are strong enough to override the primary drivers of the axis.

“Their hostility to universal human rights and democracy, their ‘Animal Farm’ understanding of sovereignty (some are more sovereign than others, only major powers are truly sovereign), their desire to make the world safe for autocracy, and their increasingly revanchist policies pose a serious challenge to the rules-based international order and its defenders,” notes Devlen.

But what should be done to confront this emerging challenge?

Ignoring the Sino-Russian alignment and waiting for it to dissolve is short-sighted at best. The despotic regimes of Putin and Xi are increasingly acting in concert with each other on issues ranging from defence to cyber security, from subverting international norms to undermining democratic societies.

Instead, according to Devlen, we need a multilayered, multilateral strategy to deal with this authoritarian axis. An effective strategy would be one that combines selective mitigation of the effects of Sino-Russian alignment with a dual-containment strategy by an alliance of democracies, led by the United States and including like-minded partners such as Japan, Taiwan, India, and Canada. This would help capitalize on the individual strengths of our democratic partners, amplifying individual state capabilities more broadly.

This strategy does not mean treating China and Russia as a monolithic bloc, as they have different capabilities and specific interests. It also does not mean we should escalate tensions or pursue military confrontation, unless instigated by Russia or China. As Devlen concludes “What it means is much closer in spirit to [the] original formulation of containment as ‘a long-term, patient but firm and vigilant’ policy.”

“The future of the rules-based international order, liberal democracy, and individual rights and freedoms depends on how well we confront this task. It’s time that democracies join to fight back against this authoritarian axis.”

Chaos ’Round The Corner for CRTC: Peter Menzies in Convivium