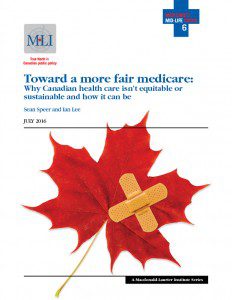 OTTAWA, July 20, 2016 – A new tentative agreement between the Ontario government and the province’s doctors after more than two years of negotiations has attracted considerable criticism from physicians in recent days. The controversy – driven in part by the increasingly unsustainable fiscal burden of health-care spending on provincial budgets – reinforces the structural problems with Canada’s health-care system and the need for reform.

This week the Macdonald-Laurier Institute (MLI) released a new study that sets out recommendations not only to put health-care spending on a more sustainable footing, but also to extend public coverage to a broader range of services and treatments for low- and middle-income Canadians.

To arrange an interview with authors Sean Speer and Ian Lee, please contact Mark Brownlee at 613-482-8327 x105 or email at mark.brownlee@macdonaldlaurier.ca.

In particular, the study shows how Canada’s universal, public health coverage is actually more limited than in other countries and leaves low- and middle-income Canadians mostly responsible for paying for drugs, dental, outpatient, and vision services and treatments.

By asking high-income Canadians to contribute to their hospital and doctors costs through different forms of patient cost-sharing, provincial governments would be able to save money for doctors’ salaries and other critical costs, and expand publicly-financed coverage for those actually who need help.

“Asking high-income earners to contribute to their health-care costs in the form of patient cost-sharing can help to ensure that the health-care system is more sustainable and universal,” explained the study’s authors, Sean Speer and Ian Lee.

Thus far the study has received positive attention in traditional media (including on CBC’s The Exchange) and social media including from a number of doctors who are on the front-lines of the health-care system.

As provincial premiers meet this week, the controversy with Ontario doctors reinforces the clear need for health-care reform and MLI’s recommendations can be part of the solution.

One common rebuttal to the introduction of patient cost-sharing is that Ottawa will not allow it – that the Canada Health Act precludes this type of financing for hospital and doctors services.

But the tide may be turning. This type of reform – asking high-income earners to contribute to their health care so provinces can expand coverage for low- and middle-income Canadians – is completely consistent with the Prime Minister’s argument in favour of means-tested child benefits. He has said that high-income families such as his should not receive public subsidies. If it is right for kids and parents, how can it be wrong for all Canadians when it comes to health care?

Therefore there lies an opportunity this week for provincial premiers to rally around reforms that make Canada’s health-care more sustainable and universal.