Zelenskyy’s power to inspire makes him a formidable wartime leader: Richard Shimooka in the Vancouver Sun

Putin may have inadvertently created the very thing he wanted to avoid and has become an inadvertent surrogate for an independent Ukrainian identity, writes Richard Shimooka. 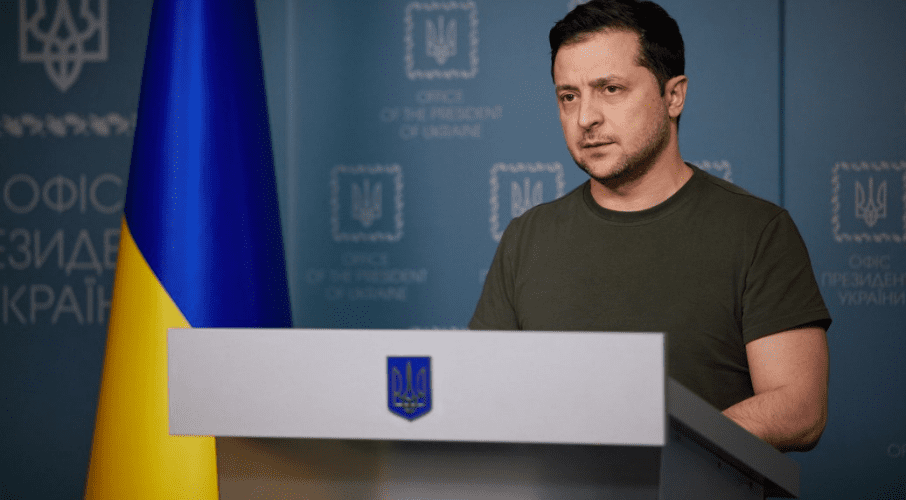 In the years leading up to Russia’s invasion of their country, Ukrainians held a fairly poor view of their prime minister, Volodymyr Zelenskyy. His first few years in office were marked by disappointment around anti-corruption drives, modernization efforts, and a host of other problems.

Yet, in the days after the invasion, he has emerged as a resolute war leader who is willing to sacrifice his own life for the safety of Ukraine.

A similar trajectory can be seen for another famous wartime leader, Winston Churchill. Prior to May of 1940, he was widely regarded as a failed politician. Nevertheless, after his surprise elevation to prime minister, he quickly rose to the occasion. Through speeches, public events and clever invocation of symbolism, Churchill cultivated an image of resoluteness in the face of extreme odds. This helped guide the country through the Second World War. Most forget his earlier struggles.

Zelenskyy’s speeches and videos convey similar themes and have similar outcomes. In response to Russian misinformation concerning his whereabouts, he put out a video showing him and most of his senior staff in the streets of Kyiv, showing their resolve and personal commitment to their state. It encouraged many Ukrainians to pick up arms and fight against the invaders. He has also made emotional appeals to various governments and groups for help, which have been effective at rallying support for his country’s cause.

Nowhere is this more apparent than in Germany, where Chancellor Olaf Scholz undertook one of the most radical reorientations of German foreign policy that saw his country discard its long-held non-interventionist stance.

Myths don’t have to be true to be effective, as the past few days make evident. The story of the 13 soldiers who perished at Snake Island, or the “Ghost of Kyiv” — a mysterious Ukrainian fighter pilot that stalks the skies above the capital — may be false, but they still inspire and fortify Ukrainian resolve through this dark time.

These myths help to further build a sense of national identity, which is critical for the outcome of the conflict. The invasion isn’t simply a military affair — it’s a political and cultural struggle over Ukraine’s place in the region. In his speeches and comments over the years, Putin has consistently played up the common fraternity of Russian and Ukrainian culture and language, going as far as claiming Ukraine is simply part of Russia. According to some analysts, he likely assumed the invasion would be a quick affair because of his resolute belief that Ukrainians would welcome Russian troops, or at least acquiesce to their rule.

The events of the past week have shown that assumption to be completely wrong. Since the 2014 Euromaidan revolution that overthrew Moscow’s puppet government in Kyiv, a sense of unique Ukrainian identity has emerged as a powerful force. In the past eight years, a new national identity has coalesced, in part, around a rejection of Russian and Soviet domination over Ukraine’s culture and lands.

The invasion has only reinforced this collective identity. Indeed, symbols like Zelenskyy’s speeches have also harnessed this identity to better resist Russia’s military efforts. A strong, committed population willing to fight for their country can play a more decisive role than hundreds of thousands of soldiers in determining the outcome.

The thing about national symbols is that they are largely impossible to uproot, especially by a foreign invader. Whatever happens from here — whether Zelenskyy survives, perishes, or is captured — the effects of those videos and his actions cannot be undone.

In practical terms, it likely means that the fight for Ukraine will continue for as long as Russia remains on its territory. Ukrainians’ commitment to their cause is evident in the determination and high morale of soldiers and regular citizens, as shown by videos of people making Molotov cocktails and throwing them at Russian vehicles and trucks.

Putin may have inadvertently created the very thing he wanted to avoid and has become an inadvertent surrogate for an independent Ukrainian identity. Even if Zelenskyy’s government falls, there is a very high likelihood a large segment of the population will continue to resist any occupation. And even if that is snuffed out through heavy-handed repression, Ukrainians will surely keep that dream alive.