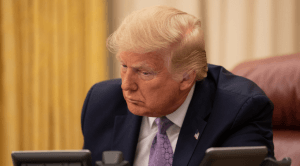 For Canadian politicians no profiles in courage are involved in slamming the departing bully Trump. What’s in play instead are easy political points, writes William Watson in the Financial Post. Below is an excerpt from the article, which can be read in full here.

We now know how Justin Trudeau would vote on the second impeachment of Donald Trump — his “repeachment,” as the Post headline put it last week. Like a cable news commentator, the prime minister told us flat-out: “What we witnessed was an assault on democracy by violent rioters incited by the current president and other politicians.” Guilty as charged, Madame Speaker.

Compare that with his artful 21-second silence last June when asked about Trump’s call for the use of military force against Black Lives Matter protesters across the United States. After the first few of these 21 seconds, as news reports put it, “Trudeau opened his mouth slightly, but did not speak.” Sound did eventually issue forth, not to answer the question directly (“It is a time to pull people together…”), but to argue that this country is not immune to racism — which is certainly true but was not the question asked.

The 21 seconds were widely interpreted as a sly, passive-aggressive way of denouncing Trump without actually speaking words that might inflame a bully still in full possession of his presidential powers. Not that Trump wouldn’t have got the message with or without words. When Trudeau and other national leaders were caught on tape discussing him at a NATO meeting in London in 2019 Trump said Trudeau was “two-faced,” which in that instance he certainly was. In 2018, after the G7 meeting in Quebec, Trump had used the terms “dishonest and weak” to characterize Trudeau after the prime minister’s resistance to U.S. tariffs was much tougher following the meeting than it had been during it when, according to Trump, he had “acted so meek and mild.” One thing about Trump: he catches his adversaries’ vulnerabilities and is never shy about spelling them out.
What accounts for the difference between Trudeau’s meaningful silence last summer and his forthright denunciation of Trump after the Capitol riot? No puzzle here: “Hi, ho, the witch is dead! The wicked witch is dead!” Trump is gone — almost: just one day left — and can’t hurt us anymore. So it’s now safe for those who so far have expressed their contempt for him in private or in code or gesture to rear back and shout it out.

Canada should retaliate against Biden’s wrong-headed decision to cancel Keystone. Here’s how: Jack Mintz in the Financial Post