Why Canada needs a justice system report card: Perrin, Audas and Péloquin-Ladany in the Ottawa Citizen 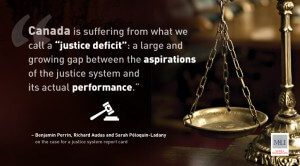 Canada’s justice system is too slow and inefficient to do its job. More money isn’t the answer. We need a justice system report card to highlight the key areas that need reform.

Five members of the Hells Angels were charged with murder and conspiracy in Sherbrooke, Que. Thirty-one of their fellow members and associates were swept up in the same police dragnet and given drug charges. Yet after months and months, the charges against all of these alleged organized criminals were stayed due to unreasonable delay.

It’s just one recent example of a justice system that is often too slow and inefficient to do its job.

Canada has report cards holding our health care and education systems to account, spurring ongoing improvement. Yet the justice system – where lives, safety, property and legal rights are in the balance – remains opaque and largely unaccountable for its outcomes.

A growing body of evidence suggests that Canada’s justice system (with few exceptions) is slow, costly and inefficient. The “justice deficit” in Canada – the gap between the aspirations of the criminal and civil justice system and their actual performance – is large and growing.

In British Columbia, a recent review of the province’s justice system was a wake-up call, finding that “costs and delays are rising, despite a declining crime rate and no increase in case load.” In Ontario, the number of people in custody awaiting trial exceeds the number of sentenced offenders in provincial correctional facilities. In Newfoundland and Labrador, unnecessary delays in the court system abound and cases are backlogged, with judges spending up to 72 per cent of their courtroom time simply scheduling hearings.

A growing body of evidence suggests that Canada’s justice system (with few exceptions) is slow, costly and inefficient.

The cost of litigation is prohibitive for most Canadians. The majority earn too much to qualify for legal aid, yet too little to afford a lawyer. For example, a Manitoba study found that the average cost of a two-day civil trial was $26,444, but anyone making an annual income of more than $14,000 was ineligible for legal aid.

The adoption of the Canadian Charter of Rights and Freedoms and associated judicial decisions has led to a dramatic increase in litigation, with pre-trial Charter motions typically taking two to three times longer than trials themselves. The Criminal Code has grown in size, becoming increasingly complex, disorganized and unwieldy.

In the North, crime rates eclipse those in the rest of Canada. For example, while the national crime rate decreased between 1999 and 2012, Nunavut’s crime rate more than doubled. Women in Nunavut are the victims of violent crime more than 13 times more often than women in Canada as a whole.

The challenges facing the justice system are myriad. Yet simply pouring more money into the system is not the answer.

While there have been innovations in some jurisdictions, it still operates on an antiquated model where people queue up and wait for their case to be dealt with. The acute care medical system doesn’t operate on such inefficient models or people would die in growing numbers, patiently waiting their turn in emergency rooms across the country without a triage system.

The challenges facing the justice system are myriad. Yet simply pouring more money into the system is not the answer.

Canada’s justice system is not performing to an acceptable standard. There is an urgent need for a regular and objective assessment of the performance of the justice system – a justice system report card – to highlight the areas most in need of reform and to enhance its accountability.

Benjamin Perrin is a law professor at the University of British Columbia and a senior fellow at the Macdonald-Laurier Institute.

Rick Audas is a health statistics and economics professor at Memorial University.

Sarah Péloquin-Ladany is a third-year student at the University of British Columbia. Their report “Canada’s Justice Deficit: The Case for a Justice System Report Card” is published by the Macdonald-Laurier Institute.

On deficits, Ottawa is anything but forward-looking: Brian Lee Crowley and Sean Speer in the National Post

On deficits, Ottawa is anything but forward-looking: Brian Lee Crowley and Sean Speer in the National Post