We need a made for Canada – not ‘made in Canada’ – approach to intellectual property rights: MLI paper by Richard Owens and Michael Robichaud 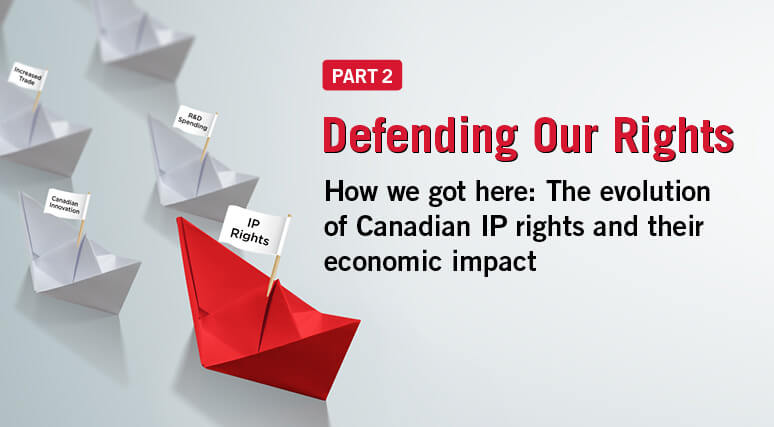 Lead author Richard Owens is urging the federal government to use the development of its intellectual property strategy – which it announced in the most recent budget – to optimize Canada’s laws to meet or exceed international standards.

“The driver for that IP policy should be innovation in Canada”, says Owens. “It should not be about reducing drug prices, addressing trade imbalances, increasing the public domain or redressing perceived injustices of property rights.

“It should be made for Canada, not made in Canada”.

To read the full paper, titled “How We Got Here: The evolution of Canadian IP rights and their economic impact”, click here.

This paper builds on Owens’ and Robichaud’s first entry in the series, which demonstrates how strong intellectual property rights are the foundation of a robust economy.

The paper takes aim at those who argue that trade with other nations is an argument in favour of weakening intellectual property rights.

This argument – based on the notion that Canada is a consumer, rather than producer, of IP-protected goods and services – is misguided for a few reasons.

First, the data doesn’t bear out that Canada is mostly a consumer. Canada has a slight trade surplus in copyright protected goods and services. And while Canada imports more than it exports in high-technology goods, the deficit is not high in proportion to the total trade of around $200 billion annually.

“We need to further encourage such high-volume trade, not worry about whether or not it happens to be in deficit”, write Owens and Robichaud.

Second, trade balance is fluid, reflecting consumer choice and comparative advantage, and should not affect IP policy. Any negative trade balance initiated by strengthening IPRs is only temporary and will be overcome by increases in domestic innovation.

“The government should recognize that an alleged trade deficit in IP-related goods is not a sound basis on which to weaken IP protection”, write Owens and Robichaud. “Indeed, it is a basis to strengthen IP protection”.

Owens says the government should resist calls for a “made in Canada” approach to intellectual property.

“IP, because of its heavy impacts on trade and because its rules derive from international treaties to a very great extent, is about international standards and developments, not sheltered parochialism”, writes Owens.

The paper offers the following takeaways:

Richard Owens is a Munk Senior Fellow with the Macdonald-Laurier Institute and lawyer who has specialized in business and commercial law, regulation of financial institutions, intellectual property and technology.

Michael Robichaud is a researcher for the Macdonald-Laurier Institute. He is currently working towards completing a combined J.D/Masters of Public Policy degree at the University of Toronto following a joint honours degree in history and political science at McGill University.