With a U.S. trade war escalating, Canada’s stability is also its weakness: Laura Dawson in the Globe and Mail 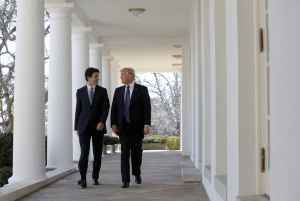 As Canada’s retaliatory tariffs roll out on Canada Day, the real fireworks will be taking place at cargo crossings at the border, writes Laura Dawson.

The U.S. Section 232 national security tariffs on imports of steel and aluminum took effect on May 31. U.S. trading partners are retaliating with tariffs against iconic U.S. products such as motorcycles, blue jeans and bourbon. Is it worth it? Lydia Cox of Harvard and Katheryn Russ of the University of California, Davis estimate that for every one steel- or aluminum-producing job protected by the tariff, 80 jobs that use steel and aluminum will be put at risk.

The U.S. government says that U.S. importers can apply for exemptions to the Section 232 tariffs if they can make the case that the imported input is not produced in adequate supplies in the United States. Since June 1, the already overburdened U.S. Commerce Department has received approximately 22,000 requests by U.S. companies to exempt their foreign suppliers. To date, fewer than 100 claims have been processed. As a top supplier of steel and aluminum to the United States, you can bet many Canadian firms will languish on this list.

Next in the Section 232 firing line are auto-sector tariffs proposed for later this summer. According to the Peterson Institute, the auto tariffs will threaten some 624,000 U.S. jobs over the next two years. If this is what “winning” a trading war looks like, how long can the United States afford it?

This week, Senator Bob Corker, the Republican chair of the Senate Foreign Relations Committee, admitted that America’s Section 232 tariffs have “successfully united the world against us. There’s not a person at the White House that can articulate why they are doing this, other than to create leverage on NAFTA.”

And what of the North American free-trade agreement? The negotiations have not been formally suspended but neither is there the bandwidth, especially among U.S. officials who are embroiled in so many disputes at the same time, to continue with them at present. After it became clear that a settlement could not be reached in time for consideration by the current Congress, the negotiators “downed tools” in June until some future date – probably not until after the Mexican presidential elections in July and possibly not until after the U.S. congressional midterms in November.

Perhaps by November, political attention will have turned elsewhere and negotiators can get back to work. With only nine of 32 chapters settled, the negotiators have their work cut out for them.

The U.S. tariffs on steel, aluminum, auto parts have little foundation in economic or business reality. In fact they threaten U.S. employment and competitiveness. But, the current trade dynamics are not about economics as much as political tribalism. Some Republicans, such as Bob Corker, Orrin Hatch and John Kasich, are speaking out against unfounded attacks on trade allies but many more Republicans are keeping mum, at least until after the midterms, since openly challenging Donald Trump on key policy areas is a sure way to get voted out of office.

Canada-U.S. relations are resilient and will recover, but this is the lowest ebb for the world’s largest, most integrated trade relationship in a generation. Nevertheless, Canada’s trade team is managing the multifront war as well as possible. The retaliatory tariffs are proportionate to the effects of the original U.S. tariffs, albeit at a cost to Canadians because all import tariffs are a tax paid by consumers. And, Foreign Affairs Minister Chrystia Freeland’s team is making a concerted effort to deal with each dispute as it comes and not let one spill over into another.

But, Canada’s moderate stand is frustrating to those who would prefer that Canada employ some kind of extreme response that would cause major damage to the U.S. economy.

There are no sources of economic pain that Canada can inflict on the United States that would not also be much worse for Canada. Moreover, international trade is conducted by businesses, not governments, so it is not feasible for governments to order private-sector companies to stop selling oil or auto parts or pork to American buyers. Such restrictions can only be applied to a limited class of sensitive products such as nuclear materials.

At the other end of the spectrum, Canada’s refusal to accept a weakened NAFTA irritates those who believe that Canada should appease the White House by making deep concessions to U.S. demands, completing a NAFTA-light that cuts Mexico out of the deal. What the appeasement camp does not understand is that the White House is not interested in economic results. It is looking to keep political promises to its electoral base, even those that ultimately hurt the economy. Thus, with the exception of dairy, there are no “quick wins” that Canada could deliver that would provide the kind of political benefits the U.S. President wants.

Even if Canada could convince the White House that the Canadian impact on U.S. employment is benign, Canada lacks Mexico’s political leverage. It does not have the congressional clout to rival the powerful Mexican-American lobby and it lacks such attention-getting incentives as immigration and drug control, and southern border access.

It is ironic that Canada’s reliability is also its downfall. While Mexico’s influence is derived from its ability to hold crisis at bay, Canada poses much less risk for the United States. This makes Mexico, not Canada, the more influential NAFTA negotiator and makes Canada’s continued alliance with Mexico all the more important.

(Image source: Office of the Prime Minister of Canada)