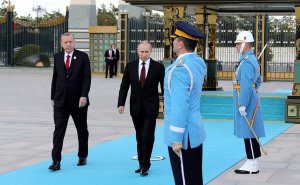 Where is Turkey heading? This question has been on the minds of many in NATO capitals lately after the decision by Turkey to purchase the S-400 surface-to-air missiles (SAMs) system from Russia despite strong objections and warnings from NATO allies. This, however, is no ordinary defence procurement debate between allies. It has serious, long-term ramifications for the Alliance and Turkey’s future in it.

The US responded to Ankara’s decision by suspending the delivery of the initial batch of F-35s and threatening Turkey with exclusion from the F-35 program. Further sanctions under the Countering America’s Adversaries Through Sanctions Act (CAATSA) are also on the table, which would have devastating effects on Turkey’s defence industry, if Ankara decides to go ahead with the purchase. Other NATO allies also voiced concerns and objections over Turkey’s decision. Turkey, on the other hand, claims that purchasing S-400s as a stand-alone system is a national decision and should not be a factor in whether Turkey continues to take part in the F-35 program.

Ankara’s decision to buy S-400s is puzzling from a military-technical perspective. They cannot/will not be networked into NATO early warning systems; thus, they need to be used as a stand-alone system. This significantly reduces their effectiveness, even as anti-aircraft systems where S-400s have a slight advantage over the Patriot SAM system. They are also inferior as an anti-ballistic missile system and not particularly suitable for Turkey’s topography. S-400s are not battle-tested, unlike Patriots. Interoperability with the other components of Turkish Air Force (TAF), including AWACS and F-16s, will be very difficult, further decreasing their utility.

At best, the S-400s could work to protect a limited geographic area such as around the capital, Ankara. There would be no significant co-production or technology transfer to speak of. The list goes on, but the bottom line is that considering Turkey’s defence needs and the problems identified above, S-400s would have been an odd choice even if NATO allies had no objections.

Being excluded from the F-35 program as a result of the S-400 procurement would also have long-term, negative national security implications for Turkey. F-35 is not only a fighter aircraft but also a force-multiplier with significant network-centric capabilities that would augment TAF’s superiority and force-projection capabilities in Turkey’s neighborhood. Imposition of CAATSA sanctions would threaten the long-term viability of Turkey’s existing F-16 fleet and will have serious negative consequences for the Turkish defence industry. Currently Turkey is an important supplier in the F-35 program and the benefit to Turkish defence industry is around US$12 billion.

So why does Ankara insist on going ahead with this purchase and risk a serious rupture with NATO allies? There are two interlocking psycho-political dimensions to Ankara’s decision. First, as I have argued elsewhere, there has been a growing rift between the West and Turkey in the last several years. Over the years, President Erdogan concentrated all the power in his hands through constitutional changes that transformed Turkey from a liberalizing parliamentary democracy to an increasingly authoritarian presidential system. As Turkey drifted further away from Western liberal values, criticism by the West intensified. Erdogan perceived the criticisms from the US and EU as attempts to undermine his rule, leading to a circle of misperception and suspicion that undermines trust and dialogue between the parties.

Second, genuine policy differences regarding Syria – especially Turkey’s frustration that the West, particularly the US, which is not seen as taking its national security concerns in Northern Syria seriously – only exacerbated this growing alienation. What might have started back in 2017 as an attempt by Turkey to gain leverage against the US, by bringing up the S-400 procurement as a way to force the Americans to align their Syria policy better with Turkey, has seemingly ended up to where it is today with the likely purchase of this system. The Americans did not blink first and the reputational cost of backing down increased significantly for Erdogan as he repeatedly said that the purchase of S-400s is a done deal.

Policy-makers in Ankara, despite all the clear signals and statements to the contrary, still seem to believe that at the end the US will ultimately give in – that they will not exclude Turkey from F-35 and will not impose CAATSA sanctions. This is a very serious misjudgment on the part of Turkish policy-makers. Indeed, this likely arises from the mistrust/suspicion that characterizes Turkish-Western relations in the past few years, which has made it very difficult to signal credibility and intent.

What does this mean for NATO and Turkey’s place in the Alliance? This growing crisis between the US and Turkey does not bode well for the cohesion and effectiveness of NATO. If Turkey goes through with its purchase of S-400s, the US will exclude Turkey from the F-35 program and most likely impose further sanctions. Some NATO allies might follow suit or radically limit their defence industry cooperation with Turkey. Other allies might limit Turkish participation in military exercises or they might simply not send high-tech sensitive weapons systems to exercises in Turkey, fearing Russian espionage. This will reduce NATO’s operational effectiveness, as Turkey is a very important part of the European contribution to many ongoing NATO operations.

Turkey, most likely, would retaliate and might even decide to expand its defence cooperation with Russia, deepening the crisis with allies. In-fighting of this proportion will only serve to paralyse NATO decision-making, which is based on the principle of unanimity, further alienating Turkey from other NATO members. Unfortunately, such a scenario seems all too plausible and it not only represents a grave threat to the long-term national interests of Turkey but also has serious consequences for the rest of NATO.

Canada can play a crucial role here. As I mentioned above, there seems to be a misguided belief in Ankara about how much NATO allies are alarmed about Turkish plans. Canada does not have the same baggage the US or EU-member allies have when it comes to relations with Turkey. It could act as a conduit for the other Allies and try to convince Ankara that it is about to make a very big and costly mistake. As things stand now, I am not optimistic that such a mission would succeed. However, it is worth a try, as the alternative will be one of the biggest crises within the Alliance since the withdrawal of France from NATO’s military structure in 1966.

Balkan Devlen, Ph.D., is Associate Professor and Marie Sklodowska Curie Fellow in the Department of Political Science at the University of Copenhagen, Denmark. You can follow him on Twitter at @BalkanDevlen.

The dangers of easy-money policies for long-term growth: Philip Cross in the Financial Post