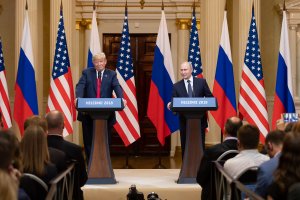 Putin might have returned to Moscow as the apparent winner, chalking up another tactical success. But the full impact of US military and energy policies have yet to fully hit home, writes Aurel Braun.

There was something surreal about Monday’s news conference with Donald Trump and Vladimir Putin. The hulking American president standing next to the diminutive Russian leader gave the latter every opportunity to deny the overwhelming evidence of Moscow’s interference in American elections. And even though President Trump did say “I have great confidence in my intelligence people,” the statement was so muted and conditional that it seemed ephemeral. Trump’s fulsome praise of Putin, on the other hand, bordered on the sycophantic.

It was not surprising that Trump’s performance caused deep embarrassment among many Republicans and outright revulsion among Democrats. The president’s tendency for bombastic, hyperbolic and confrontational rhetoric too often makes reasoned assessment of his actual policies difficult.

Yet words are not necessarily policy. When it comes to Russia, Trump’s soft rhetoric in fact has belied the reality of some very hard policies.

To best illuminate these policies, it may be worth applying Occam’s razor and focus on Putin’s primary concerns and Russia’s most important vulnerabilities: the military and energy.

It is worth recalling that, with the exception of its nuclear arsenal, Russia is not a superpower. With its unidimensional and stagnant economy, which in nominal terms is about the size of Italy’s, and with a huge looming demographic time bomb, Russia is not likely to become one in the foreseeable future. Yes, the country presents a regional threat, but this is not the Cold War.

In many ways, Putin has become ever more dependent for his political legitimacy on external successes as Russia’s underdeveloped and corrupt economy underperforms. A large military buildup and the use of so-called hybrid warfare have allowed Putin to enjoy what at least in tactical terms appear to be successes in Crimea and Syria. Yet his military successes, his modernization of nuclear forces and his ability to prod and probe Western defenses have depended to a great degree on not being effectively challenged by a collective West that possesses vastly greater resources. Putin simply cannot afford an arms race and would be at a great disadvantage even with a relatively moderate Western military escalation.

The military challenge that Putin fears is exactly what is happening under Trump, who has sharply increased the American defense budget to more than $700 billion. His relentless push for greater NATO expenditures adds to the American military buildup. And NATO’s Readiness Initiative agreement at the Brussels summit, due to strong pressure from Defense Secretary Jim Mattis, will create large allied units — 30 land battalions, 30 air fighter squadrons and 30 navy ships — that can respond to aggression in 30 days or less, making it vastly more difficult for the Kremlin to continue threatening Eastern Europe.

In fact, the Brussels Declaration is bound to have a deleterious impact on Russia’s military position. Signed by all members, including the United States, it not only reiterated a commitment to Article 5 of the Washington Treaty, but leveled withering criticism at Russia and issued warnings to Moscow. The declaration also condemned Russia’s aggression in Ukraine, provocative Russian activity near NATO borders, its modernization of strategic forces and “its irresponsible and aggressive nuclear rhetoric.” It affirmed that it viewed Russia’s annexation of Crimea as illegal and illegitimate. The meeting in Helsinki did not change any of this.

Finally, the Russian economy is utterly dependent on energy exports and high energy prices. Energy makes up about 60 percent of Russian exports. Trump’s energy policies might be environmentally harmful in the longer term, but they permit the United States to become a major energy exporter. This can depress energy prices and, in the long term, greatly diminish Russian energy leverage over Europe. All of these would have a vastly more negative impact on the Russian economy than any of the current sanctions.

Putin might have returned to Moscow as the apparent winner, chalking up another tactical success. But when the full impact of Trump’s military and energy policies hit home, Putin, who openly favored his election, might well come to regret it.

Aurel Braun is a professor of international relations and political science at the University of Toronto and a center associate at the Davis Center at Harvard University.