The report offers the first in-depth survey-data of the opinions and experiences of Canadian professors and the public about academic freedom, viewpoint diversity, and the role of universities in this country. 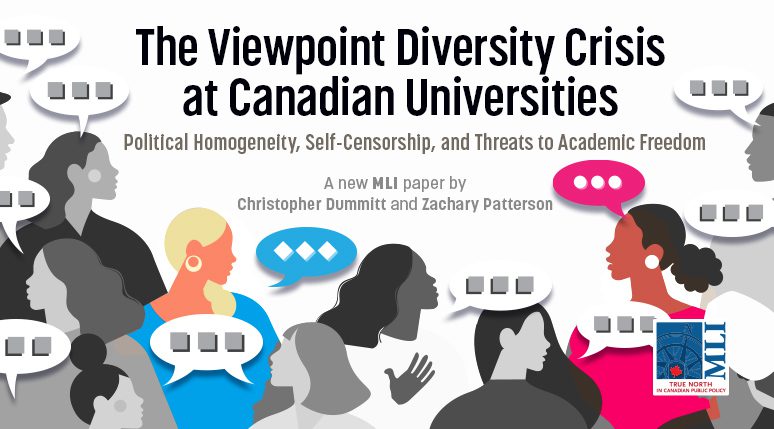 Academic freedom has a long history of protecting unorthodox thinkers and contributing to the search for knowledge and truth. Unconventional ideas can later prove to be incredibly important. Unfortunately, we can’t know ahead of time which unconventional ideas will prove useful. Academic freedom – and the related concept of free speech – is part of the way a liberal society remains open to diverse views, to scientific inquiry, and to self-correction.

This paper substantiates the claims that there is a serious crisis in higher education in this country. Canadian universities are political monoliths whose lack of viewpoint diversity contributes to serious problems on campus including a weakening of support for academic freedom, a hostile climate for those who disagree with left-leaning values, and significant levels of self-censorship.

We conducted a survey from March 3 to 17 (administered by Leger) with the aim of understanding how the general public and professors themselves think about the role of universities and university professors in Canada today. The results described in this paper were drawn from that survey.

Our survey shows that Canadian universities are seriously deficient in viewpoint diversity and have instead become politically homogenous institutions. Professors vote overwhelmingly for parties of the left and 88 percent self-identity as left-leaning, with only 9 percent voting for conservative parties (compared to 38 percent more generally). Further, it seems as though political skew is increasing in Canadian universities but a lack of good data prevents us from seeing by how much.

Organizations filled with like-minded individuals often fall prey to some of the most dangerous forms of conformity. They are likely to make significant errors in the absence of a diverse array of information, and the sameness of those within the organization leads to overconfidence by the majority and self-censorship by those who might be inclined to disagree. This leads to a climate that is hostile to those with minority political viewpoints.

When we asked if professors would be worried if their political opinions became known, almost 88 percent of left-leaning professors were either not very worried or not worried at all. However, when we looked to the right-leaning political minority, the situation changed considerably: 44 percent were somewhat or very worried about facing negative consequences if colleagues, students, or others on campus learned of their political opinions. And 40 percent of right-leaning professors feel like they face a hostile work environment.

This form of self-censorship is evident in how professors behave today. Among right-leaning professors, 57 percent have self-censored in universities out of fear of negative consequences. It affects professors of all political leanings, as 34 percent of all professors admit to self-censoring out of fear of negative consequences should their views on certain topics become known. Most professors support academic freedom in principle. But in practice, a large minority or professors – from 32 percent to 34 percent – are prepared to limit academic freedom and “cancel” their colleagues out of a commitment to their political views on social justice

This level of fear and hostile climate should raise a red flag about freedom of speech at universities. Not wanting to be singled out for wrong-think, political minority professors will instead self-censor.

In response to our survey, professors provided a range of examples and scenarios in which they have kept silent on topics – from changing the way they teach and avoiding topics altogether to even changing their research career in order to avoid possible negative repercussions. While right-leaning professors are largely those who feel the most need to self-censor, this does not mean that self-censorship isn’t also an issue for some other scholars including those on the left.

Academic freedom protections in collective agreements don’t seem sufficient to protect academic freedom on campus today. Most importantly, those provisions are often not as strong – or are nonexistent – for part-time staff who make up a significant portion of the teaching component at most Canadian universities. Further, collective agreement provisions also often don’t effectively protect faculty from online campaigns or complaints from students or the public.

What, then, can be done? We recommend several options including 1) the creation of an Academic Freedom Act; 2) insisting that universities remain politically neutral in their public statements, hiring practices, and organizational structure and rules; 3) eliminating political loyalty tests from hiring, research funding, and other human resource decisions and bodies; 4) legislate that unions cannot discriminate based on politics in the defence of their members; and 5) generally promote a culture of academic freedom.

Canada must revoke sanctions waiver on Russia and prioritize the development of infrastructure to export gas to Europe: Marcus Kolga