A tax on remote workers would do more harm than good: Linda Nazareth in the Globe and Mail 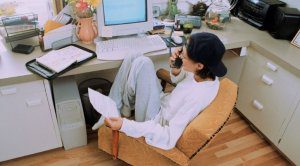 Putting a tax on workers outside of the office will inevitably mean fewer will be able to do so, at a cost to them, their employers and potentially the larger economy, writes Linda Nazareth in the Globe and Mail.

Concern that automation will displace many low-wage workers as clever robots learn to brew coffee and make sandwiches has been building for years. Now, the COVID-19 pandemic has dealt another blow to those in the service sector as many people working from home have figured out how to make their own coffee and sandwiches, without the need for even a robot’s help.

Are those work-from-homers a drain on the economy and so much so that there should be a tax on their employers? That is the premise of a new report from Deutsche Bank that suggests a postpandemic tax on people working from home may be a fair and necessary way to move into the next phase of the future of work.

Behind the Deutsche Bank proposal is the tacit acknowledgement that the way we work has changed, and it is too late to flip a switch and take things back to a prepandemic reality.

According to the bank’s data on workers in Europe and the United States, more than half of those who tried out working from home over the pandemic want to continue doing so permanently two or three days a week.

A survey by Benefits Canada in the spring suggested Canadians may be even more enamoured of the concept, with 85 per cent saying they would like to keep working remotely even after the pandemic is over.

While not all companies will be on board with this, some already are, and more people working from home is bad for the economy – or at least that is the way Deutsche Bank sees it. The report’s rationale goes something like this: We created a whole infrastructure – stores, restaurants, office buildings and transportation systems – around people leaving their homes and physically going to a workplace to be with other people. Those who want to change the rules are going to topple the economy, and someone should pay for that.

What is certainly true is that there is a widening divide between people who can choose to work at an office or at home and those service sector workers who have no choice but to show up for work every day. Now, during the pandemic, that latter group is in greater physical danger than the former in that they are much more likely to pick up COVID-19.

Moreover, many of those workers will continue to have fewer opportunities in general as we evolve to a world with more automation and perhaps less demand for their work. It is a bit of a generalization, but the fact is that we will increasingly see haves and have-nots in the labour force and some kind of tax might be a (perhaps clumsy) way to raise revenues to support those in the latter group.

Deutsche Bank envisions such a tax being paid by employers and taking 5 per cent of salary. The amount is judged to be equal to or less than the amount that workers would spend on commuting and expenses such as lunch and work clothes, with the implication being that by giving that money to government, it can then smooth out the economic damage done by having people at home.

The second part of the plan would have the tax revenue redistributed to those who will be hurt in a world where some people have exited from everyday economic participation. This could be in the form of a grant to those who cannot work from home and who are below a certain income level (a surgeon, for example, would not be eligible). Presumably, this would buffet their incomes in an uncertain world (much like a universal basic income) and, in a best case, let them put some of the grant toward retraining.

As worthy as the goals of all of this may be, at the end of the day, a work-from-home tax is simply a tax on businesses that aims to interfere with how they organize their work forces, and it may reduce total employment.

Putting a tax on workers outside of the office will inevitably mean fewer will be able to do so, at a cost to them, their employers and potentially the larger economy. As well, the premise behind a work-from-home tax is that workers doing so are somehow doing something bad for the economy, although it is not at all clear this is the case.

At the very least, it leaves out the fact that there are societal benefits to working from home, not least of which are the environmental savings from fewer people commuting. There is also the argument that people working at home are subject to fewer stresses and thus less likely to get sick and need medical care.

From a North American perspective, taxing businesses who allow staff to work remotely may never be politically tenable, but raising the idea has merits.

In the end, we may have to levy taxes on businesses or individuals to cover some difficult transitions, and we may indeed have to look at the idea of a universal basic income, as well as government-sponsored training and a larger role for non-profits and educational institutions in training and retraining. We may also have to think about the cost of supporting businesses that will inevitably fail as it becomes increasingly clear that emerging from the pandemic will not result in a total return to work as usual – with the requisite purchases of coffee and sandwiches near the office.

The least-cost path to net zero needs oil and gas: Jack Mintz in the Financial Post

Webinar Panel Video: Rising to the challenge – Why we need supply chain resilience and economic security in the COVID era

Webinar Panel Video: Rising to the challenge - Why we need supply chain resilience and economic security in the COVID era