Systemic racism in policing in Canada and approaches to fixing it: New MLI commentary by Christian Leuprecht 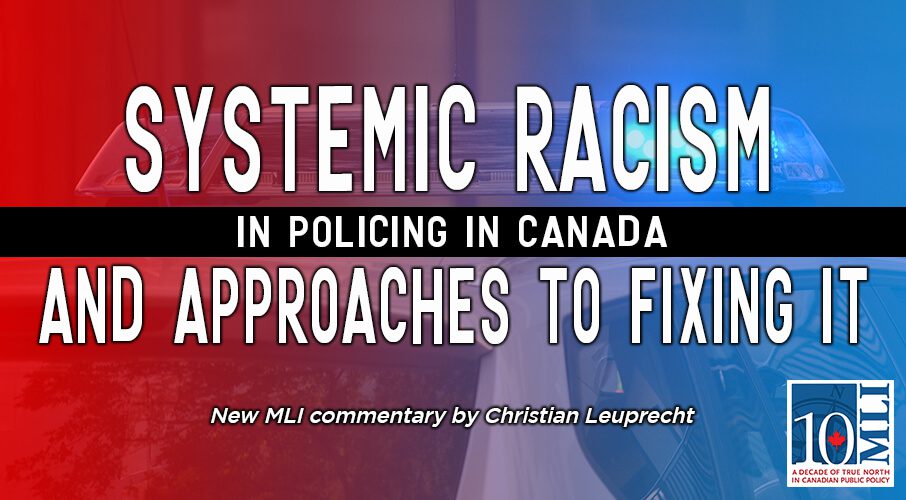 OTTAWA, ON (August 31, 2020): Racial turmoil in the United States has led to a sustained debate on police use of force in Canada that is long overdue. While the situation in Canada is in many ways different from the US, issues of systemic racism persist in Canada, and needed reforms have been neglected for many years.

A new commentary by Christian Leuprecht, titled “Systemic racism in policing in Canada and approaches to fixing it,” argues that the fault for this lies primarily with political leaders who set the framework conditions and constraints for the delivery of police services. This commentary is based on the author’s written submission to the House of Commons Standing Committee on Public Safety and National Security.

Leuprecht first adds some important perspective on the fatal use of force, which remains relatively rare. Of all fatal encounters with police in Canada, between 2000-2017, 43 individuals were identified as Black (10 unarmed) and 69 were identified as Indigenous (12 unarmed). For comparison, writes Leuprecht, “about 10 Canadians a year are killed by lightning; in 2018 249 homicides were committed using a firearm, 1922 people died from car accidents, and by mid-August, 9000 people had died from COVID.” But we need to understand the situation much better, Leuprecht adds.

Leuprecht recommends that the RCMP should be much more transparent, and regularly release use of force data.

Police are often in a difficult position in having to deal with larger societal issues caused by poverty or mental health issues. “Often, [police are] the only government presence in communities suffering from economic hardship and pervasive social challenges,” writes Leuprecht. “When police are the only establishment left, police become the adversary.”

This is not to absolve the police. There are many internal structural issues of their own making, including shortcomings in terms of accountability, transparency, and a lack of evolution at the leadership and management levels.

To reduce negative interactions between police and racialized communities, Leuprecht recommends increasing the civilianization of service delivery where possible, strengthening community policing, and improving accountability mechanisms, particularly at the middle management levels, among other measures.

Many of these recommendations draw from the extensive body of work outlined in previous MLI papers written by Leuprecht, including his 2017 study on fixing the governance, leadership, and structure of the RCMP and his 2019 report on alternative service delivery for policing.

Despite the need for changes within the RCMP and other police services, the principal challenges are political in nature, and so leadership must come from policy-makers. However, with the federal government having announced the prorogation of Parliament, Leuprecht warns that the move could kill a crucial report on systemic racism in policing being produced by the House of Commons Standing Committee on Public Safety and National Security.

At the same time, there is a silver lining here insofar as the prorogation of Parliament buys Public Safety Canada time to re-work Bill C-3; Leuprecht has several suggestions to strengthen C-3 through improved and expanded oversight for both the RCMP and CBSA.  However, that this bill has died on the order paper a second time confirms just how little appetite the government has for genuine reform.

“Systemic racism in policing in Canada in general, and in the RCMP in particular, requires stronger and sustained political leadership,” argues Leuprecht. “This government has an opportunity to take immediate action if they are serious and committed to genuine reform. The responsibility to diminish the gap between civilians and police lies, first and foremost, with politicians.”

Build back better: Jack Mintz in the Financial Post

Our V- and L-shaped recovery: Philip Cross in the Financial Post

Our V- and L-shaped recovery: Philip Cross in the Financial Post