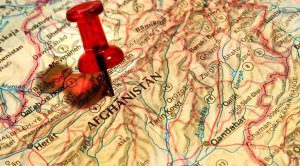 The outcomes in Afghanistan should give serious food for thought to the interventionist ambitions that characterized successive US presidential administrations, writes Christian Leuprecht.

Better an end with horror than horror without end.  That seems to be the messaging from the Biden administration: American unilateralism on full display, with strategic objectives subordinated to a singular political imperative.  So that on the 20th anniversary of 9/11, the US president can announce to the American people that after 20 years, US military operations in Afghanistan have ended and US troops have returned home.

The election of Donald Trump had made abundantly clear the US electorate was unwilling to tolerate expeditionary operations while middle America was hurting.  For Democrats to be competitive in the 2022 midterms and the 2024 presidential election, President Biden knew he had to stay the course.  US Marines and allied soldiers – 1000 British, 500 French, 160 Germans, a Norwegian field hospital – ended up putting their lives on the line to salvage the impossible position into which they were thrust.

Meanwhile, Canada sent special forces to extract embassy personnel and assist Canadians who managed to make their own way inside the Kabul military airport perimeter.  Unlike other allies, however, Canada was conspicuously absent from broader collective support for coalition operations to exit Afghanistan.

Exiting from conflict zones normally involves repatriating citizens first, then removing military equipment and withdrawing troops last.  To meet the above timeline, the Biden administration did the opposite: it withdrew troops, while leaving US citizens and equipment behind.  The administration wanted to believe its own narrative – that a Taliban sweep was inconceivable, given the US$83 billion invested in the Afghan National Army and the 3500 coalition soldiers who had lost their lives, notwithstanding the Taliban gaining ground steadily since 2017.

The fateful decision to move the US embassy to Kabul airport caused mass panic: it signalled that Kabul would not hold. Only six weeks prior President Biden had infamously professed: “The likelihood there’s going to be the Taliban overrunning everything and owning the whole country is highly unlikely.”

The US approach was bedeviled with a string of critical flaws, rooted in fundamental misunderstandings. The Special Inspector General for Afghanistan Reconstruction had ominously identified “a willful disregard for information that may have been available.”  For instance, in many urban centres the Taliban successfully paid off supposed defenders not to make a stand.  In the end, however, no one was more surprised by speed of their success than the Taliban themselves.

Reassured by the president’s confidence, the US had left 10,000-15,000 of its citizens in Afghanistan, alongside a host of our allies’ country citizens.  The US also left behind an arsenal of weaponry, including A-29 Super Tucano attack planes, MD-530 reconnaissance and close attack helicopters, and counter-rocket and artillery defence system, among others.  Some have reportedly fallen into the hands of the Taliban; other equipment is undoubtedly being disassembled and reverse-engineered by Chinese and Russian intelligence.

By 2016, the US had also provided 75,898 vehicles and 208 airplanes to the Afghan National Army (ANA). And the Taliban reportedly seized UH-60 Black Hawk and A-29 Super Tucano aircraft; equipment such as sophisticated C-208 light attack aircraft, PC-12 planes with the latest intelligence, surveillance and reconnaissance technology, ScanEagles drones, and untold thousands of light weapons were also pilfered. Indeed, in widely viewed footage over recent days, Taliban “commandos” could be seen parading around with US-supplied equipment.

After the decapitation of Ghaddafi, arms outflows from Libya had fuelled instability across the Sahara-Sahel, which Canadian soldiers have been helping to contain in Niger and Mali. Afghanistan is Libya on steroids.

The Taliban control border checkpoints and are impeding people from leaving.  Half a million people have been internally displaced in recent weeks, in addition to Afghanistan’s 3.5 million internally displaced persons. Eighty percent of Afghans suffer from food insecurity, 90 percent are subject to water insecurity.  And the Taliban have been upending traditional water-sharing agreements to divert scarce water flows to poppy cultivation and in an attempt to weaponize water and food.

Hubris and folly had caused President Trump to make what Kori Schake deems “one of the most disgraceful diplomatic bargains on record,” in which Trump had agreed to withdraw all coalition forces, end military and contractor support, forced the Afghan government to release 5000 Taliban fighters, and did nothing when the Taliban went back to fighting the Afghan government.

In return, the Taliban agreed to stop targeting US or coalition forces, not provide safe harbour Al-Qaeda and other terrorist organizations, and negotiate with the Afghan government.  Trump’s own former national security advisor called it a “surrender agreement,” without inspection or enforcement mechanisms.

To be sure, Afghanistan is a different country today than it was 20 years ago.  The majority of Afghans do not support the Taliban. The Taliban are contending with armed opposition from within, economic collapse, and deeply conflicted regional relations that call into serious question their regime’s ability to prevail, let alone survive.

To dismiss the Afghanistan drawdown as an outlier would be a categorical error: the US and allies are doing work similar to Afghanistan elsewhere in the world.  The harm done by America’s chaotic withdrawal from Afghanistan will reverberate for years to come.  It plays into Chinese and Russian narratives of US and Western decline and further alienates trusted allies, especially in Europe.

The Trump and Biden administrations’ Faustian bargain to legitimize the same group the US had spent 20 years fighting on the battlefield effectively bestows political recognition the Taliban, a listed terrorist organization.  This presages serious commitment problems for the US and allies elsewhere.

Geostrategically, the drawdown makes good sense.  In fact, it should have been done years ago.  The entire region is a secondary theatre; having squandered two decades and US$4 trillion on distractions in Afghanistan and Iraq instead of containing China, the US can finally double down on the Indo-Pacific.  This theatre requires America’s undivided attention.

In the long-run, whether turning Afghanistan back into terrorist sanctuary by handing the country to the Taliban or other groups (not just Islamic State-Khorasan Province but also the pro-Uyghur East Turkestan Islamic Movement with its past links to Al-Qaeda) and abandoning regional security influence to Pakistan, China and Russia outweighs the benefits of the US and coalition partners staying put is debatable.  To be sure, the global Salafist-Jihadi movement just got a major shot in the arm.

At the same time, Beijing’s jingoist propaganda machine has been gloating: the US abandoned Afghanistan; so, Taiwan should expect likewise.  If it is not in the US national interest to stay in Afghanistan, what interest would the US have in getting into a war with China over Taiwan?  Whether Taiwan is analogous to Afghanistan and whether recent events have emboldened China to invade remain to be seen.

Consider this counter-factual: how different might the outcome have been had the coalition drawn down within months of routing Al-Qaeda and once Osama bin Laden had evaded US General Tommy Franks?  For Western electorates, Afghanistan has only reinforced the perception that investments in large-scale expeditionary operations do not pay dividends.  Ergo, the trend has been towards missions with a small footprint, clear aim, limited rules of engagement, and a definitive timeline.

The outcomes in Afghanistan should give serious food for thought to the interventionist ambitions that characterized the US presidential administrations of Bill Clinton, George W. Bush and Barack Obama – and the dubious quality of strategic advice political elites have been receiving over the past quarter-century.

Pundits have long decried US overreach; they are about to be granted their wish.  But if Afghanistan is a harbinger of US “grand” strategy under the Biden administration, they and allies may soon find themselves beset by nostalgia.  US allies can only hope that Otto von Bismarck’s aphorism actually rings true: “God has special providence for fools, drunkards, and the United States of America.”

Christian Leuprecht is Class of 1965 Professor in Leadership at the Royal Military College, director of the Institute of Intergovernmental Relations, Queen’s University, and senior fellow at MLI.

How Pakistan enables the Taliban and what Ottawa should do about it: New MLI Commentary

Canadians on Flights Out of Kabul: Christian Leuprecht on CTV News

Canadians on Flights Out of Kabul: Christian Leuprecht on CTV News