The Ottawa Citizen has published edited versions of opening statements by the participants in the Oct. 24 Great Canadian Debate at the War Museum. Professor and former Alberta energy minister Ted Morton argued for the resolution: “President Obama should welcome Canada’s ethical oil.” For Andrew Nikiforuk’s counterargument, click here. For more on the debates, click here. 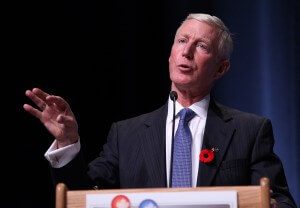 American opponents of the Keystone XL Pipeline are understandably concerned about global warming. They think that if they stop the pipeline, they will stop the oilsands, and thereby reduce the growth of CO2 emissions. Their intentions are good, but their reasoning is wrong.

Stopping Keystone will not stop the oilsands. Nor will approving Keystone contribute to increased carbon emissions in either the U.S. or Canada. The real opportunity for Americans to reduce their CO2 emissions is to convert their coal-fired electricity plants to natural gas.

The Canadian oilsands will continue to grow with or without KXL. Global consumption of oil is projected to increase 47 per cent by 2035. Almost all of this increase is in the developing world, and cannot be stopped. And much of this will come from the oilsands. Of global oil reserves open to free-market development, over half are in Western Canada. Since 2005 foreign investors — mostly from Asia — have spent $72 billion on oilsands acquisitions. The road to the world’s energy future runs through Canada.

This oil can and will get to foreign markets, without going through the United States.

Current proposed pipeline capacity out of Alberta is three million barrels per day, 80 per cent of it to Canada’s West and East coasts, and on to international markets. Their construction requires no American approval. Whatever new oil that cannot be moved by pipe, will be moved by rail.

The real question for Americans is not whether they should continue to import oil, but which countries will that oil will come from? Notwithstanding its new oil shale reserves, the United States will continue to need to import six million barrels of oil a day.

The objective of the Keystone project is to get Canadian heavy oil to refineries in US Gulf Coast. These refineries are engineered for heavy oil, but have lost the supply sources they need to run at capacity. So if they don’t get it from Canada, most will come from Venezuela — whose environmental standards are much weaker than Canada’s; whose heavy oil that has the same carbon footprint as Canadian oilsands; and a nation that is hardly a friend of the Americans. Hugo Chavez may be gone, but his anti-U.S. policies continue. Why send money to a government that hates you?

Even if Keystone is not built, Canadian oil will come anyhow — but by train rather than pipeline. This is already happening. Rail transport of oil out of Western Canada has increased 10 fold in the past two years, and is projected to double again by 2014 — to 360,000 barrels a day. In the U.S., rail transport of oil from the new Bakken fields in North Dakota has soared from 9,500 barrels a day in 2008 to 800,000 barrels this year. So one way or another, it’s coming. Pipelines are clearly the cleaner, safer option.

Keystone opponents have diverted attention from the real benefit of the Canadian oilsands to the U.S. economy: that the supply chain reaches deep into the American economy. There are more than 2,400 American companies in 49 states supplying equipment and services used in the oilsands.

But it’s energy security that will be the greatest economic benefit to Americans. Since the 1973 OPEC oil embargo, American foreign policy has focused on ensuring security of supply from the Middle East. The costs have been staggering. Estimates for the two Iraqi wars and Afghanistan range from $1 trillion to over $3 trillion dollars.

The advantages of Canadian oil over Middle Eastern oil are obvious. As Brian Schweitzer, the former governor of Montana bluntly put it, you don’t have to send the National Guard to Alberta.

Americans intuitively sense this advantage, and a majority consistently support Keystone. This may explain why the anti-pipeline lobby has started to make a new appeal — playing the anti-foreigner card: “A vote for Keystone is a vote to raise gas prices on Americans and to send the profits to a foreign oil company.”

For American opponents of Keystone to play the “foreigner” card against Canada is a bit rich. Along with the United Kingdom, what country has been America’s most reliable ally, through thick and thin, over the past century of world wars and crises? And in America’s post 9/11 push for greater energy security, what country did it turn to? Today, Canada is the largest source of all American energy imports — for oil, natural gas and electricity.

And as for “profits going to foreign oil companies,” some of the oldest and largest operators in Western Canada are Exxon-Mobil, Conoco-Phillips, Chevron — names that are hardly “foreign” to Americans.

If Americans want to make meaningful and affordable reductions in their carbon emissions, they should expedite the conversion of coal-fired electric generation plants to natural gas — a change that immediately reduces CO2 emissions by 50 per cent per plant. America’s coal-fired power plants spew out 1.7 billion tons of carbon a year, 30 times more than the oilsands produce. To make the point differently, the oilsands produce one-tenth of one per cent of total global emissions, so even shutting them down completely wouldn’t make any meaningful difference. Converting from coal to gas would.

President Obama was elected in 2008 because he inspired Americans with his idealism. This was good. After 9/11, Iraq, Afghanistan and the 2008 recession, Americans needed hope.

But now the President is nearing the end of his presidency. He will be judged not on what he promised, but on what he has delivered. The American middle-class wants to go back to work, not back to war. They want to keep their children at home starting careers and families — not fighting America-hating jihadists halfway around the world.

President Obama has staked part of his legacy on leaving the planet a cleaner place, declaring “our national interest will be served only if [Keystone] does not significantly exacerbate the problem of carbon pollution.”

This does not have to be an either/or proposition. He can approve Keystone and use the cheaper energy — and the economic growth it will generate — to expedite America’s conversion from coal to gas.

Approving Keystone helps to open the door for the legacy that President Obama surely wants — the President who got America out of the Middle East and into a lasting economic recovery. Reducing carbon emissions by converting from coal to gas would be the icing on the cake.

Ted Morton is a senior fellow at the School of Public Policy and the Manning Foundation and a professor at the University of Calgary. Previously he served as minister of energy, minister of finance and minister of sustainable resources in the government of Alberta. Thursday evening at the War Museum, in a debate hosted by the Macdonald-Laurier Institute and moderated by the Hon. Peter Milliken, former speaker of the House of Commons, journalist and author Andrew Nikiforuk and former Alberta energy minister Ted Morton debated the resolution: “President Obama should welcome Canada’s ethical oil.” Reprinted here are their opening statements.

MLI’s Crowley in the Citizen: The Taiwan approach to China

MLI's Crowley in the Citizen: The Taiwan approach to China