Shifting our 1% obsession to a plan for inclusive growth: MLI paper by Sean Speer 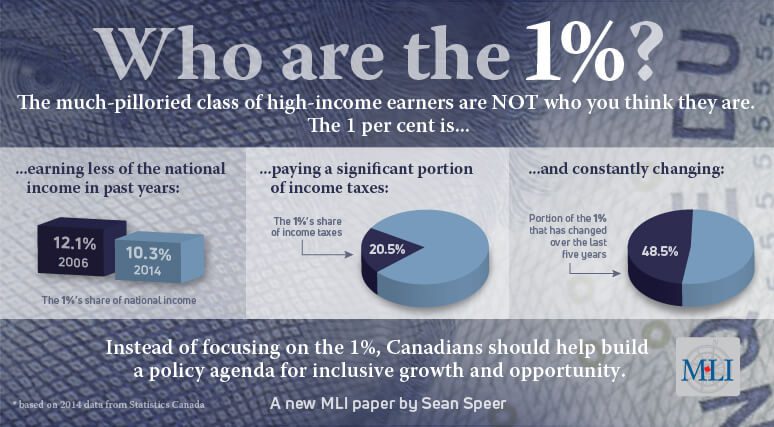 Canada’s obsession with the top 1% of income earners is masking the debate we should be having: How do we create equality of opportunity – rather than equality of outcomes – for all?

Far from a private, unchanging club brimming with privileged Upper Canada College grads, the 1% is earning less of the national income than in past years, paying a significant portion of income taxes and constantly changing each year.

That’s the conclusion from a new Macdonald-Laurier Institute paper. Sean Speer, MLI Munk Senior Fellow, delves into the numbers to explore whether the outsized obsession with the 1% matches up with reality.

“It sure seems like a lot of attention for only 268,505 people or a population group only slighter larger than Saskatoon”, says Speer.

To read the full paper, titled “Taxing the 1%: The limits of redistribution and a plan for inclusive growth”, click here.

At its root this disproportionate interest in the top 1% of income earners is a broader debate about the tensions between freedom and equality, efficiency and equity, and redistribution and reward. It speaks to these fundamental questions that reflect political preferences and compromises in our political system.

But it is not to say that no evidence can brought to bear on these questions including who comprise the 1%, the limits of redistribution, and alternative ideas to support upward mobility.

The paper presents the following facts:

The study then examines existing research and evidence on the limits of income and wealth redistribution not only with regards to work, investment, and entrepreneurialism but also philanthropy and charitable giving as well as government revenues.

As an alternative, the paper sets out some basic policy ideas – including bolstering opportunity in our Indigenous communities, promoting affordable and responsible homeownership, and supporting blue-collar workers – to form the basis of a more positive, pro-mobility agenda for all Canadians.

The goal should be to strengthen the conditions of equality-of-opportunity rather than equality-of-result. This vision would place the focus less on the zero-sum question of “fair share” and more on inclusive growth.