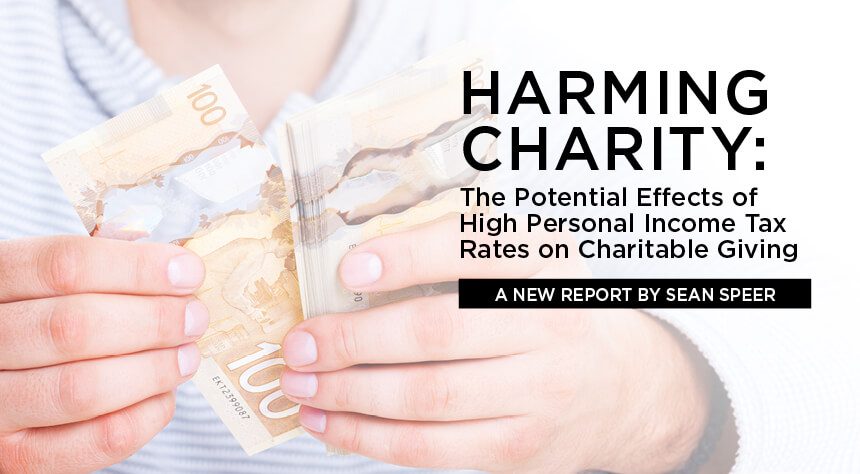 OTTAWA, ON (June 27, 2019): Taxes are rising in Canada. Seven of 10 provinces now have combined top marginal tax rates exceeding 50 percent, and the federal government has made a mantra of asking the wealthy to “do a little bit more.” At the same time, the number of charitable donors is dropping, and the total amount of donations is flagging. Is there a connection?

Unfortunately, little attention has been paid to this rather obvious question. That is the subject of a new MLI study by Munk Senior Fellow Sean Speer, titled “Harming Charity: The potential effects of high personal tax rates on charitable giving.” To read the complete study click here.

Speer finds the short answer is that there could well be a connection between high taxes on top earners and charitable giving. And policy-makers should consider the potential impact on the many vital programs offered by charities operating in Canada – hospitals, shelters, support for refugees – when they think about raising taxes on Canada’s philanthropists. Those who earn $150,000 or more, what Speer calls our “super donors,” represent only 9 percent of charitable donors, but they consistently account for 40 percent of the total value of charitable donations.

The Senate has recently released a report about preserving the Canadian charitable sector which recommends that the federal government “review existing tax measures available to individual donors in order to strengthen the culture of giving among new and current charitable donors.” According to Speer, such a review “should certainly include looking at lowering high income tax rates.”

Beginning in 2010 the number of charitable donors in Canada has steadily fallen. In 2016 alone, the total value of charitable donations made by those earning $150,000 or more fell by 6 percent. There are likely numerous factors at work here, but it was also the year the federal government’s new top marginal rate for those earning over $210,000 came into effect.

“The bottom line is that there is a cost to everything and this could be another reason to be very cautious about embracing a ‘soak the rich’ approach to tax policy,” said Speer.

But Speer explains that the body of scholarship on the relationship between taxation and philanthropy does not paint a clear picture, or offer easy answers. In the past, research concentrated on the price effect as the most significant factor in changing giving intentions, the idea being that changes in the “price” of a donation, including through tax incentives, are what drives donors. Indeed, the thinking was that higher taxes actually incentivized giving, because charitable donations could be sheltered from taxes.

But more recent research has emphasized the income effect, particularly on our “super donors,” meaning that the larger factor affecting the decision to give was after-tax income for the biggest philanthropists.

“In the end,” says Speer “contributions are determined by a combination of how much we earn and how costly it is to give. If higher tax rates could harm both the economy and civil society, is the price worth paying?”