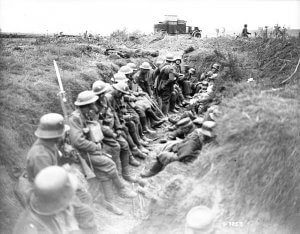 The most significant battles in our history were during the Hundred Days of 1918, costing 15,000 Canadian lives, writes J.L. Granatstein. Lest we forget.

Most Canadians know something of the battle of Vimy Ridge in April 1917. The victory there saw the Canadian Corps take a key enemy position, and the great Canadian memorial atop the ridge has been the scene of national commemorations and countless individual pilgrimages. Fewer Canadians know about Ypres in April 1915 when the raw soldiers of the Canadian Division fought through the first dreadful German gas attack. And even fewer know about the battle of Passchendaele in the autumn of 1917 when the Canadian Corps struggled through a morass of mud and suffered some 16,000 casualties to take a worthless rise of land in the flat Flanders fields.

But almost no Canadians know anything about the Hundred Days of 1918 when the Canadian Corps, led by Lt.-Gen. Sir Arthur Currie, fought the most significant battles in Canadian military history. From Aug. 8 to the signing of the Armistice on Nov. 11, the 100,000 men of the four Canadian infantry divisions defeated one-quarter of the German army on the Western Front in a great succession of terrible struggles.

Beginning at Amiens, France, the Canadians, Australians, British and French smashed through the German lines, gaining up to 14 kilometres on the first day. The Canadians, the “shock troops of the British Army,” as historian Shane Schreiber dubbed them, had been moved some 60 kilometres in secrecy to the Amiens front, each soldier ordered to “Keep Your Mouth Shut!” Then with tanks, artillery, aircraft and infantry working together in a near-perfect combined arms attack that featured both disinformation and surprise, the Canadians attacked. “Within 10 minutes of the start,” Gunner Bertie Cox remembered in an extraordinary account of the attack on Aug. 8, “the tanks, by the hundreds, and the cavalry, by the thousands, were passing our guns. It made an awful pretty picture to see the tanks and cavalry looming up in the mist, over the crest, just about dawn. The field guns began to pass at a gallop too, not to mention the infantry by the hundreds of thousands. By 5 a.m., the prisoners began to go by and this procession continued all day. … We spent a considerable part of the day checking them over, getting souvenirs. … They nearly cleaned us out of cigarettes and emptied our water bottles.” It was, declared another soldier, “the best executed and best picked out plan that was ever pulled off.” True enough. It was also what German strategist Gen. Erich Ludendorff called “the black day of the German Army in the war.”

Three weeks later at the end of August and the beginning of September, the Canadians, having moved north, fought their way through the Drocourt-Quéant Line near Arras, driving ahead through machine-gun bunkers and heavily defended strongpoints. The fighting was brutal and terribly costly to both sides, but the men of the Corps broke the enemy line.

Then at the end of September, Gen. Currie’s men fought their tactical masterpiece and crossed the Canal du Nord. Currie had sent two divisions across a dry portion of the canal, then fanning them out to roll up the enemy positions. The Corps’ engineers threw up bridges across the canal under fire, and tanks, guns and more infantry went across. The fighting over the next week was especially difficult for the weary Canadians. “Never have I felt so depressed as I felt after that battle,” young brigade commander J.A. Clark recalled. “It seemed impossible to break the morale and fighting spirit of the German troops. We felt that this Boche could not be beaten,” he continued, “certainly not in 1918. He fought magnificently and in a most determined fashion. He discouraged a great many soldiers in the Corps.” The enemy was broken but far from beaten, and the infantry battalions in Clark’s brigade had been shattered in the fighting in front of Cambrai.

Still, in what Gen. Currie called the Corps’ hardest fighting of the war, the Canadians pressed the Germans back to Cambrai, their major transportation and supply hub in northern France. On Oct. 9 and 10, they seized the city, dousing the fires the retreating enemy had set.

There was one last set piece battle at Valenciennes, close to the French-Belgian border, where a single Canadian brigade attacked Mont Houy under the heaviest Canadian artillery barrage of the war and routed the German defenders. The pursuit then began, the enemy fleeing eastward, leaving behind only machine-gun teams to slow the chase. On Nov. 10, the Canadians were at Mons, Belgium, the symbolic town where the British Expeditionary Force had first faced the invading Germans in August 1914 and had been forced to retreat. The Canadians liberated Mons just as the Armistice brought the Great War to a close.

In truth, the Armistice was really a German surrender. There was no “stab in the back” as Adolf Hitler and others in Germany would proclaim. The German army had been defeated on the field of battle by the Allies, and the Canadian Corps had played a distinguished, costly role in the victory. The Hundred Days cost Canada some 15,000 dead and 30,000 wounded, almost one fifth of the 240,000 Canadian casualties suffered in four years of war.

And yet, somehow no one in Canada today seems to know of the Hundred Days, its great and important victories all but forgotten. The government in Ottawa planned nothing to honour the soldiers who fought and won these victories a century ago. Veterans Affairs sent its minister to Newfoundland and New Brunswick for small ceremonies, but the departments of Canadian Heritage and National Defence offered nothing. The Canadian War Museum did create a fine exhibit “Victory 1918,” and a few regiments and a number of Legion branches held small ceremonies. The single most impressive series of commemorative events in the nation took place in Cobourg, Ont., a town of only 17,000. Cobourg put on three stage plays, mounted an exhibition of splendid Great War paintings by Charles Pachter, decorated the streets with banners, and presented a series of lectures by historians. But no government department in Ottawa honoured Sir Arthur Currie, Canada’s greatest general. Sadly, none paid a genuine tribute to the men of the Canadian Corps who played such an outsized role in defeating Kaiser Wilhelm’s army.

Why celebrate battlefield victories?, someone in Ottawa must have asked. After all, the Trudeau government is much more interested in present-day peacekeeping than in marking past victories that almost no one remembers in our ahistorical nation. Better to let Amiens, the Drocourt-Quéant Line, the Canal du Nord, and the pursuit to Mons pass with scarcely a nod.

The prime minister will attend the Nov. 11 ceremony in France. That’s enough for him. Canadians nonetheless should pause to remember the centennial of the Canadian Corps’ Hundred Days this Nov. 11. The soldiers of 1918 were not all saints and heroes. But there were saints and heroes among them, they fought for Canada, and the least we can do is to stand for a few moments of silence to remember the brave men who defeated the German army in the climactic battles that brought the First World War to its close. Canadians at the very least owe them that — and much, much more.

J.L. Granatstein is a Canadian historian who writes extensively on political, military, and diplomatic history. He sits on the Macdonald-Laurier Institute’s Research Advisory Board, and is the author of ‘The Greatest Victory: Canada’s Hundred Days, 1918.’