To remain relevant, unions must adapt: Dijkema and Speer in the Telegraph Journal 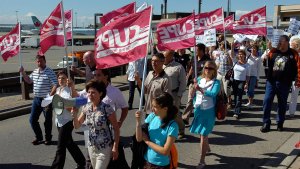 In order to remain relevant in an age of declining membership, unions must reinvent themselves, write Brian Dijkema and Sean Speer.

The US Supreme Court’s recent ruling in the Janus case may not have immediate effects on organized labour in Canada, but it’s part of a growing trend toward voluntary unionism that should cause union leaders to rethink how best to serve their members in the modern age.

First the ruling. The case was concerned with whether public employees in the United States could be forced to pay union fees to fund the activities and work of public sector unions. The court ruled in a 5-4 decision that non-union workers cannot be forced to pay what are known as “fair share” fees.

These fees had sought to prevent “free-riders” whereby workers might benefit from collective bargaining irrespective of whether they belonged to a workplace union. Yet the majority of Supreme Court judges ruled that compulsory fees were unconstitutional because an individual’s contribution could be directed to ideological or political activities with which he or she disagree may disagree.

The expectation is that the ruling will lead to fewer resources available to US public sector unions in the short-term and a further shift to voluntary unionism in the longer-term. Some experts have thus called it the most significant court decision affecting collective bargaining in decades.

The truth is the decision is only significant to the extent that it reinforces a broader trend towards non-compulsory union membership in the workplace. Twenty-eight US states already have “right-to-work” laws that enable voluntary unionism in the private sector. The Janus decision now extends this principle to public sector unions.

This will almost definitely lead to a continuation of the longer-term trend of declining overall membership in labour unions. Union density is already down to 10.7 percent in the US. It’s a bit higher in Canada at 27 percent. The difference is inflated by the public sector where the unionization rate is 34.4 percent in the US and more than 70 percent here. The court’s decision effectively breaches one of the last walls of the house of labour, and many anticipate a decline in the role of labour in our economic and social life.

It’s presumptuous however to assume that the Janus decision necessarily means the permanent decline of organized labour in the US or Canada. For those on both the right and the left who prefer local, grassroots level adjudication of wages and working conditions rather than top-down imposition of those conditions, the need for solidarity among workers remains, regardless of judicial decisions.

If unions want to thrive in a world without past privileges, they’ll need to change. It will require eschewing divisive political causes, humanizing their bureaucracies and services, and rediscovering the virtues of social solidarity.

Any reforms must start with a recognition that that the current model of organized labour is unlikely to endure in any particular weight beyond the public sector, a fact that might exacerbate existing inequality between private and public sector workers. And it’s not enough to simply blame “neo-liberalism” or changes in the economy such as the decline of the manufacturing sector. A major part of the blame lies with union themselves who over time grew disconnected from their missions and their members.

Compulsory membership laws obscured the problem. Workers saw their mandatory deductions come off their paycheques but otherwise had minimal connection or interaction with their unions. Historic ideas of community and solidarity were replaced with utilitarian appeals about pay and benefits and uniformly left-wing politics that invariably alienated some percentage of the membership.

It’s no surprise therefore that when Michigan passed “right-to-work” legislation 25 percent of public school teachers opted out or that when Indiana extended voluntary unionism to the public sector as many as 90 percent ceased paying dues.

This wasn’t merely about free ridership. Members had come to question both the utility and the meaning of union membership. The institutions had become hollow and impersonal. Any sense of social mission outside of sexualized politics had long disappeared.

This will need to change if unions are to persuade workers that union membership confers substantial benefits. Collective bargaining will of course remain important but in the modern economy it likely will look significantly different than it does today. Instead organized labour’s future lies in rooting itself in communities and providing associational connections and support for its members. Unions can bring a healthy dose of community and solidarity, and act as a vehicle for justice in an era of social and economic atomization. This, in our view, is the raison d’etre of organized labour in the modern age.

As one of us has written, however, a true community-centred unionism will require significant reforms – including shifting power and resources from large-scale national activities to local ones aimed at members, and placing a greater emphasis on working families. Current lobbying and advocacy budgets should be redirected to pay for a massive increase in front-line staff to assist and support members and to experiment with new models of bargaining that eschew the outdated adversarial model that has been the mainstay of Canadian labour relations since the Second World War. A renewed emphasis on parental leave would help those working parents in sectors with unpredictable work schedules such as food services and retail. The list of more community-centred priorities of course goes on and on.

But the key point, it seems to us, is that decline is a choice and the Janus decision only reinforces that organized labour in Canada and the US must choose whether to renew its commitment to community and solidarity or continue to shrink and decline. If it chooses the latter, labour unions may one day credit this moment as the catalyst for their renewal and flourishment.

A US-Canada trade war rages on—and we are not blameless: Crowley and Speer in Maclean’s