The fundamental challenge facing housing policy in Canada is a lack of adequate supply. A new solution is needed. 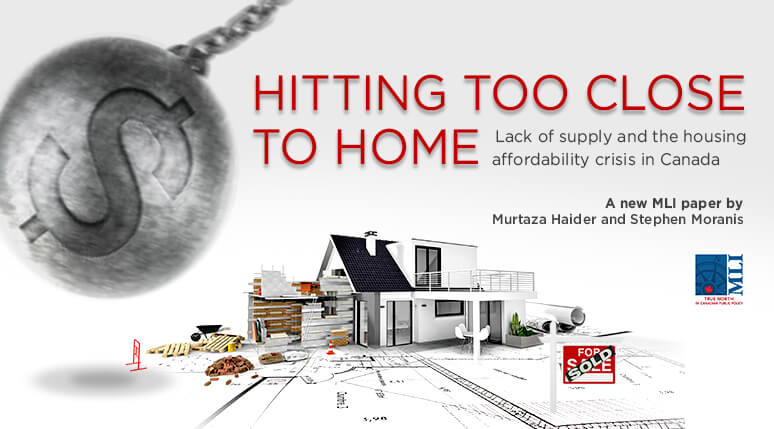 OTTAWA, ON (November 24, 2021): With the return of Parliament, the increasing cost of living – particularly skyrocketing house prices – has become the most important issue for Canadians. Many feel that buying a first home is simply out of reach. But despite the profile of the issue in the last election and the priorities for the new federal government, the solutions proposed miss the mark due to a failure to focus on the biggest driver of high home prices: a lack of supply.

In their new MLI paper, “Hitting Too Close to Home: Lack of supply and the housing affordability crisis in Canada,” authors Murtaza Haider and Stephen Moranis write that “housing affordability has been called a crisis in Canada for decades. Decades later, housing prices have increased many times over. However, average household incomes have not kept pace with the increase in prices.”

“The fundamental challenge facing housing policy in Canada is a lack of adequate supply,” the authors conclude.

The lack of supply is itself a by-product of poor public policy. Haider and Moranis find that persistently low construction rates have left Canada with a housing shortfall – roughly 1.8 million dwellings fewer than what Canada needs to be on par with the G7 per capita average. Had Canada maintained the housing construction rates observed in the 1970s, Haider and Moranis argue that Canada could have some 5 million more dwellings than we do today.

Compounding this supply problem has been a lack of willingness by politicians to stand up to anti-development NIMBYs and overzealous urban planners whose “supply skeptic” plans artificially constrain supply and delay approvals for new developments. As the authors write, “structural and ideological constraints must be addressed to achieve an adequate supply of housing in Canada.”

Even when construction is approved, there is often too little construction of dwellings suitable for families with children, further exacerbating the affordability challenge.

Haider and Moranis argue that many of the proposed policy solutions have been simply insufficient and poorly targeted. Not only has the federal government’s multibillion dollar National Housing Strategy failed to make a dent in the overall affordability crisis, but in fact house prices in Canada have risen by some 70 percent since the Liberal government first assumed office in 2015.

Similarly, during the recent federal election, proposals by political parties fell woefully short. All three major parties isolated foreign owned homes as a major challenge, despite the fact that only 5 percent of Canadian homes are owned by people outside the country. The 2021 platforms also focused on providing financial assistance for first-time buyers, which would likely only increase demand and drive up prices further. And insofar as political leaders recognized the supply problem, their parties proposed the building of extra new homes without articulating a clear strategy for encouraging their construction in the face of persistent structural and ideological constraints. Those hoping for stronger direction from the Throne Speech have unfortunately been left without any more clarity on how Ottawa intends on reversing this affordability crisis.

A new solution is needed. Haider and Moranis propose the federal government should use its spending power to induce lower levels of government to adopt policies that reduce regulatory barriers and speed up approval processes for private investment in housing. Additionally, leaders from all tiers of government must work together to set housing policy geared toward increasing supply. Lastly, the authors urge Ottawa to focus investment on affordable housing for low-incomes, financial guarantees, and targeted support to key regions.

“What is needed to solve the problem,” according to Haider and Moranis, “is a consensus amongst all tiers of governments with a stake in residential construction to recognize the large gap in supply and collaborate to set targets to address the shortfall.”

Murtaza Haider is a professor of Data Science and Real Estate Management at Ryerson University. He also serves as the research director of the Urban Analytics Institute. Stephen Moranis is a strategic and seasoned real estate leader with broad international experience in the private, public and non-profit sectors. He is a former president of the Toronto Real Estate Board.