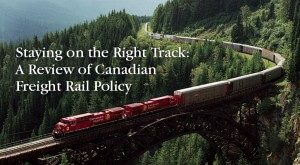 On Friday, Ottawa introduced new legislation called the Safe and Accountable Rail Act. The new law would force companies to help cover the costs of a derailment by contributing to a compensation fund.

Cairns commended the government for the balance of the proposed legislation.

“Some of the commodities they ship, the risk is extremely high. I think the railways have been interested in sharing that risk but the shippers did not want to,” Cairns told the Globe.

Cairns is the author of a recently released MLI paper, titled “Staying On The Right Track: A review of Canadian freight rail policy”.

The report demonstrates that a more sophisticated and relaxed regulatory system has resulted in greater investment and lower rail rates, while heavy handed approaches have done serious harm in the past.

To read the Globe and Mail story on rail regulation, click here.

Provinces should follow Norway’s lead on resource investing: Poelzer in the StarPhoenix