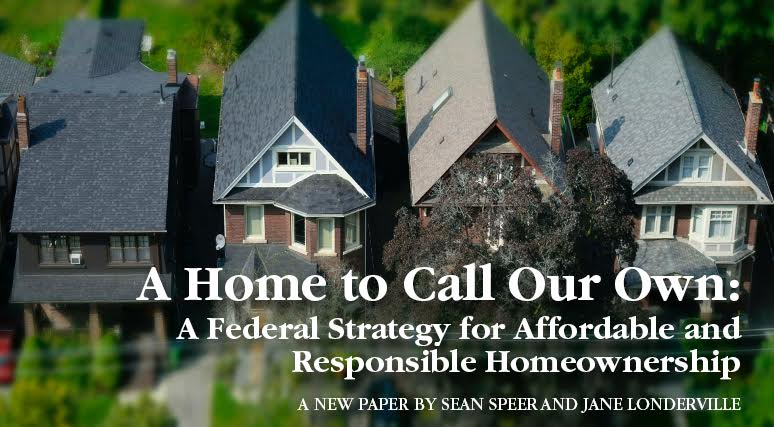 OTTAWA, Nov. 15, 2017 – Many Canadians are increasingly worried about being able to afford a home, particularly in major centres. The next generation of home-buyers are rightly wondering if they will be able to realize the many benefits of homeownership.

Toronto and Vancouver are now among the least affordable cities in the world. Just consider that Toronto’s housing prices jumped nearly 33 percent in 2016 alone. The average home now costs roughly $875,000 and average detached homes have reached nearly $1.6 million. Vancouver is now the only Canadian city with average prices – for both ground-level houses and condos – exceeding $1 million.

To its credit, the federal government has recognized this growing problem. It is soon expected to release its much-anticipated National Housing Strategy. But there is a risk that the wrong policy mix could put homeownership further out of reach for more Canadians.

Today, the Macdonald-Laurier Institute releases a new study setting out recommendations to promote and support affordable and responsible homeownership by Sean Speer and Jane Londerville.

Policy-makers and the public have been debating the sources of our housing affordability challenges and what governments ought to do about them for several months. There have provincial and local policy responses thus far with a particular focus on “demand-side” factors such as foreign investment. The federal government has a vital role to play, but federal housing policy continues to lack coherence.

To read the full paper, titled “A Home to Call our Own: A Federal Strategy for Affordable and Responsible Homeownership,” click here.

Federal policy changes are regularly enacted with little focus on their consistency or compatibility with other housing-related policies. We have seen successive cases of mortgage rule tightening while Ottawa has concurrently expanded incentives and subsidies for first-time home buyers. “Policymakers should aim to replace this Bride of Frankenstein with a carefully conceived strategy,” write Speer and Londerville.

One example is the insurance premiums set by the Canada Mortgage and Housing Corporation. CMHC announced in June 2017 that it would pay the federal government a special $4 billion dividend over the next two years (beyond what it already sends Ottawa from net income). We should question whether struggling young homebuyers should be subsidizing Ottawa’s revenue to this degree.

Federal housing policy should start to look like it was purposefully designed rather than a mishmash of disparate initiatives and measures, explain the authors. To this end, MLI has set out some clear principles and recommendations to inform the government’s thinking as it considers its own strategy. These include:

“We believe that affordable and responsible homeownership carries with it considerable economic and social benefits and ought to be a major part of the federal government’s vision of inclusive growth,” write the authors. “Adopting the principles and recommendations set out in this paper would, in our view, help to ensure that the National Housing Strategy can be a key plank in such an agenda.”

Jane Londerville is a retired Associate Professor from the University of Guelph, where she taught real estate finance and appraisal in the B.Comm program in Real Estate and Housing for over 20 years.

For more information, please contact David Watson, managing editor and director of communications, at 613-482-8327 x103 or email at david.watson@macdonaldlaurier.ca.