Declaring Myanmar’s crimes as genocide must be followed by action: Robert Murray in the Toronto Sun 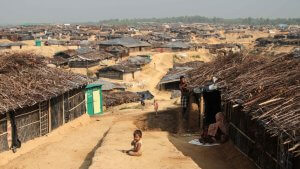 Ottawa should take further actions to address and help end the killings of innocent people in Myanmar, writes Robert Murray.

Canada has taken the symbolic, yet important, step to strip Myanmar’s State Counsellor Aung San Suu Kyi of her honorary Canadian citizenship. Many had wondered why this has yet to be done by the Government of Canada, and the government should be commended on moving on finally doing so.

It also follows the House of Commons’ unanimously passing a resolution to recognize the ongoing killings of the Rohingya minority in Myanmar constitute genocide. The resolution further endorsed the findings of the UN fact-finding mission that found the highest levels of the Myanmar military had sanctioned crimes against humanity and called on the United Nations Security Council to refer the matter to the International Criminal Court.

The motion was adopted to thunderous applause and a standing ovation in the House of Commons. Canada’s Foreign Affairs Minister Chrystia Freeland remarked that the motion was a “a very important statement by Canada, the Canadian Parliament,” and that “Canada has been at the forefront of both pursuing justice for the Rohingya and working to provide support and succour for the Rohingya who have been forced out of their homes.”

Minister Freeland was referring to the Canadian response to the humanitarian crisis in Myanmar to date, which has included the appointment of Bob Rae as a Special Envoy to Myanmar, whose final report was released in April, targeted sanctions, approximately $300 million in humanitarian aid, and Canada working to raise the issue at various international bodies, such as ASEAN, the G7, Commonwealth, and the United Nations Human Rights Council.

Despite these moves and Canada’s efforts to raise awareness of the horrendous crimes being committed in Myanmar, neither Canada nor any state has done nearly enough to initiate action that would end the crimes and the suffering.

The motion passed by the House of Commons on September 20th was silent on Canada’s obligations under international law regarding actions that must be taken if genocide is, in fact, identified. Proclaiming the situation in Myanmar as a genocide is little more than political symbolism at a time when true and courageous action is necessary.

While Canada is limited in its ability to unilaterally initiate action to end such egregious crimes, there are further actions that Canada can easily take, yet has not to date. These responses, many of which were eloquently articulated by Irwin Cotler and Brandon Silver in Maclean’s, can include significantly stronger sanctions, like those introduced against Myanmar in 2007, as well as aggressive lobbying of its allies to follow suit. Canada can also work to have the matter referred to the International Criminal Court, the International Court of Justice via the UN Convention on Genocide, and to a special tribunal, as identified in the UN’s report. It could also support the work of the UN investigation team that has just been approved to investigate human rights violations against the Rohingya in Myanmar.

Canada can work with allies to develop potential political, financial, or military responses against those committing these acts and those supporting them. History has shown that true leadership in the face of humanitarian crisis must involve more than symbols, money, and debate on the floors of the United Nations. By declaring the situation in Myanmar as genocide, Canada has a legal and moral obligation to act to address and end the killings of innocent people.

Each time politicians use the word ‘genocide’ without properly or adequately appreciating the duties that follow, the strength and power of the term, and the international legal obligations attached to it, become weaker and weaker. In the case of genocide, ethnic cleansing, crimes against humanity, and war crimes, the stakes are too high to settle for symbols without ensuring everything at our collective disposal is being done to protect the most vulnerable.

Robert W. Murray is Senior Fellow at the Macdonald-Laurier Institute and the Canadian International Council.