Moving Beyond the Hollowness of ‘Never Again’: Robert Murray for Inside Policy 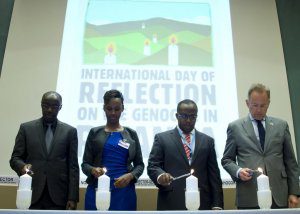 We need to undertake real action in order to ensure humanitarian atrocities like the Rwandan genocide are not repeated, writes Robert Murray.

On April 7, the world observed the International Day of Reflection on the 1994 Genocide against the Tutsi in Rwanda, marking the 24th anniversary of the start of the Rwandan genocide. Leaders and observers from across the globe echoed the familiar anthem of ‘never again,’ reminding us of our collective responsibility to ensure that humanitarian atrocities like what occurred in Rwanda are never repeated.

Recognizing the noble sentiments behind such statements, we know all too well that the international community has done an abysmal job of working to prevent humanitarian crises, to protect those experiencing atrocities and suffering, and in those instances where action was taken, to provide a path forward for those who were the victims of egregious human rights abuses.

The commemoration of the anniversary of the start of the Rwandan genocide was particularly noteworthy this year given the ongoing crimes against humanity and war crimes being committed in the Rohingya crisis in Myanmar and in the Syrian civil war. Indeed, the world was only just recently exposed to another chemical weapons attack by the Assad regime in Syria. These ongoing events, along with a myriad of other human rights abuses across the globe, help to underscore the enormity of the ‘never again’ romanticism’s failure.

This is not to say that there has been no progress since the atrocities in Rwanda took place. The significant growth in awareness of humanitarian crises, the proliferation of agencies and institutions dedicated to addressing atrocity crimes, and the expansion of the human security regime have all had a positive impact on the global human rights architecture.

There has yet to be any accepted model for preventing or responding to humanitarian crises.

The Responsibility to Protect (R2P) has also compelled greater education of humanitarian crises and been used in various political and diplomatic forums to hold states accountable for their human rights abuses. Rwanda’s experience was a catalyst in the post-Cold War era for appreciating the need for a more robust human rights protection regime, and has served as an important lesson for how and why immediate and meaningful responses to humanitarian crises are necessary.

Despite these advances, there has yet to be any accepted model for preventing or responding to humanitarian crises. This is becoming further complicated by the ongoing evolution of world order. While western states are seemingly unwilling to enforce human rights law and norms, it is unlikely that other states will be any more willing to respond to, or intervene in, such crises – especially given that a number of non-western powers do not accept the normative foundations of the global human rights regime.

Countries like China and Russia have shown reluctance or outright contempt toward the idea of meaningful steps in protecting vulnerable populations and, in some cases, have actively vetoed potential action to safeguard their regional or geopolitical interests, making them enablers of abuses.

We owe it to the victims of atrocity crimes to do better than repeating hollow statements and being satisfied with hashtag humanitarianism. Recognizing the difficulties in responding to humanitarian crises that currently exist, and those that will be affected by the evolving world order, the outlook for responses to humanitarian crises remains bleak.

It is essential that states improve their coordination efforts in both preventing and reacting to crises, and that the international community enforces international law and improves accountability mechanisms for those responsible in committing atrocity crimes. Piece-meal interventions, ad hoc military responses, and proclaiming ‘never again’ are clearly not sufficient remedies for those in need.

Why Facebook and Google want to make sure Canadians can keep stealing entertainment: Owens in the Financial Post

Why Facebook and Google want to make sure Canadians can keep stealing entertainment: Owens in the Financial Post