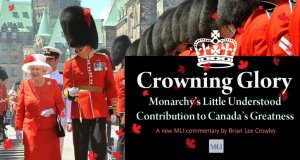 OTTAWA, ON (May 30, 2018): Many Canadians were transfixed earlier in the month with the wedding of the Duke and Duchess of Sussex, Prince Harry and Meghan Markle, on May 19. It is only natural for Canadians to be interested in this wedding, beyond the spectacle of celebratory, given the continuing role of the monarchy in our parliamentary democracy.

As Crowley notes, from the original authority of the Crown came the unintended or “grown” consequence: “that the personal rule of the wearer of the crown was increasingly hemmed in by the requirements of consent from parliament to the government’s ambitions.”

“Thus the politically accountable institution of the Crown,” said Crowley, “has emerged as by far the greatest and most important part of the monarchy that once rested in the hands of the individual who occupied the throne.”

Since the sovereign reigns but does not rule, the monarch is above political partisanship and therefore symbolizes the unity of the nation. Crowley contrasts this happy state of affairs with the desire of so-called “rationalists” for a republican system with an elected head of state. He says, that “in an era of identity politics in which the political parties seem ever more bound to try and appeal to voters based on their membership in some group or another, whether taxpayers or sexual or racial minorities or veterans or the ‘middle class’, such a unifying symbolism is sorely needed.”

It is through the institution of the monarchy, concludes Crowley, that we are reminded of our “shared tradition of the rule of law, of the indispensable consent of the governed, of Magna Carta, habeas corpus, and a thousand other rights and traditions and customs.”

With Trans Mountain, the Liberals will suffer the ‘social licence’ whirlwind they’ve sowed: Brian Lee Crowley in The Financial Post

With Trans Mountain, the Liberals will suffer the 'social licence' whirlwind they've sowed: Brian Lee Crowley in The Financial Post