in A Mandate For Change, Commentary, Latest News, Releases
Reading Time: 3 mins read
A A 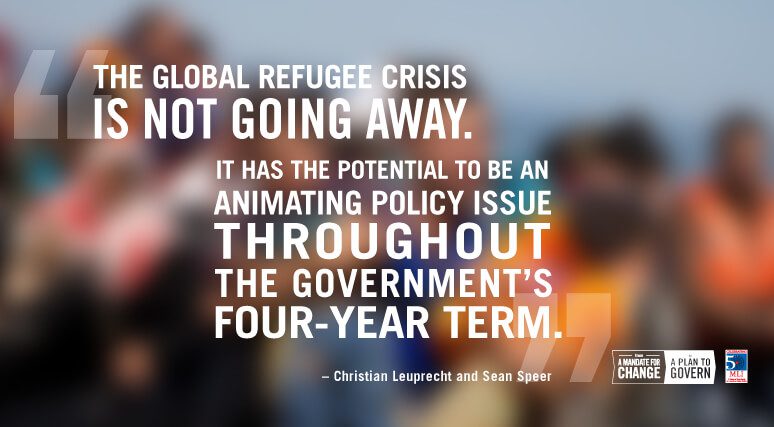 Latest installment of the Macdonald-Laurier Institute’s Mandate For Change series calls for a move beyond ad hoc promises to a coherent, systematic plan

OTTAWA, Dec. 9, 2015 – The crisis in Syria has catapulted refugee policy to the top of the federal government’s agenda. How can the governing Liberals best balance compassion for victims of conflict with concerns for Canada’s security?

“The global refugee crisis is not going away”, write Leuprecht and Speer. “It has the potential to be an animating policy issue throughout the government’s four-year term”.

The paper is the latest entry in “From A Mandate For Change To A Plan To Govern”. The series, which will publish weekly from the Throne Speech to the first budget next spring, is designed to offer practical policy recommendations that help the newly-elected government follow through on its election promises.

Canadians should applaud the governing Liberals’ initial steps when it comes to refugees, write Leuprecht and Speer.

“The global refugee crisis is not going away”

The promise to immediately resettle 25,000 refugees builds, in the short-term, on Canada’s recent history of admitting victims of conflict. Over the long-term, the new government has expressed a willingness to “get it right” when it comes to refugee policy.

That’s where the Macdonald-Laurier Institute comes in.

There are limits on what we can learn from the past given the magnitude of the current refugee crisis, write Leuprecht and Speer. The government will need to adopt new strategies for screening and integration that reflect the unique nature of current conflicts. But the following three principles should guide Canada’s new refugee policies.

Christian Leuprecht is Associate Dean of the Faculty of Arts and Associate Professor in the Department of Political Science and Economics at the Royal Military College of Canada, and cross-appointed to the Department of Political Studies and the School of Policy Studies at Queen’s University. He is a Senior Fellow with the Macdonald-Laurier Institute.

Tags: christian leuprechtFrom A Mandate For Change To A Plan To GovernSean Speer
Previous Post