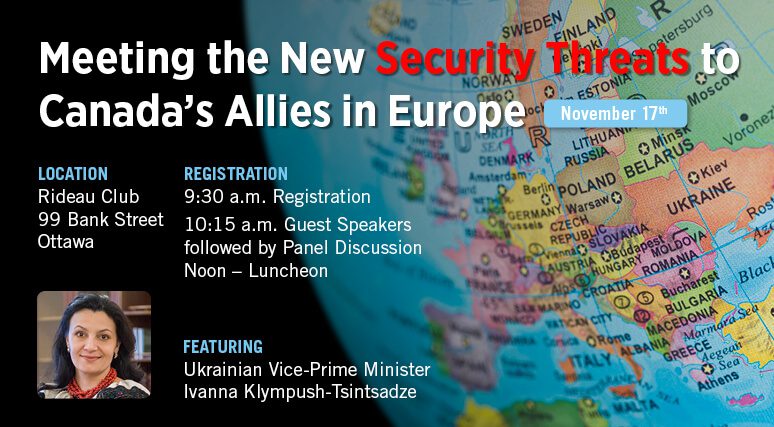 Macdonald-Laurier Institute event will host a collection of leading thinkers for a discussion on the changing security situation in Europe, featuring Ukrainian Vice-Prime Minister Ivanna Klympush

OTTAWA, Nov. 15, 2016 – The Macdonald-Laurier Institute invites you to attend a discussion on how best to meet the new security threats to Canada’s allies in the Baltics, and Central and Eastern Europe.

The event, which will take place at the Rideau Club, will feature Ukrainian Vice-Prime Minister Ivanna Klympush-Tsintsadze during her visit to Ottawa, on Nov. 17, 2016.

The Vice-Prime Minister’s remarks will be followed by a high-level panel discussion bringing together the best thought leaders on collective security in Europe. Embassy of Ukraine Ambassador, His Excellency Andriy Shevchenko, will also be a special guest.

If you are interested in covering this event, please contact Mark Brownlee at 613-482-8327 x105 or email at mark.brownlee@macdonaldlaurier.ca.

Twenty five years ago, Canada was proud to be the first country to recognize Ukrainian independence. Now, as Vice-Prime Minister Klympush visits Ottawa, Ukraine is gripped by a struggle with Russian-backed separatists. Russian energy strategy, cyber warfare, military expansion and propaganda are intended to wreak havoc from the Baltics to Central Europe and beyond.

How can Canada work with its allies to ensure collective security and peace for the democratic nations on NATO’s frontier?

The Ukrainian Embassy is co-presenting this event.