The Marshall Decision and The Impact of Two Decades of Commercial Re-Empowerment: New MLI Report 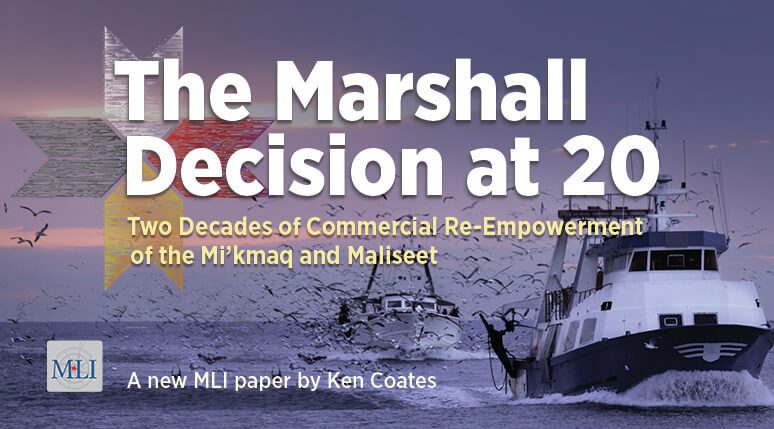 OTTAWA, ON (October 24, 2019): In 1999, the Supreme Court issued its ruling in the case brought forward by Donald Marshall Jr., finding that the 18th century “peace and friendship” treaties between the British government and Mi’kmaq and Maliseet had to be honoured. The Marshall decision, as its commonly known, resulted in the federal government being compelled to respect these First Nations’ treaty rights when it came to commercial fisheries, radically changing the economic landscape of the region.

Now, after twenty years, what has been the impact of Marshall? In MLI’s latest report titled The Marshall Decision at 20: Two Decades of Commercial Re-Empowerment of the Mi’kmaq and Maliseet, Munk Senior Fellow Ken Coates examines the serious and sustained benefits that arose following the Marshall decision, which brought about new economic opportunities for Indigenous peoples.

“In the 20 years that followed the Marshall decision, Mi’kmaq and Maliseet communities capitalized on the opportunities generated by the court ruling,” explains Coates. He argues that this resulted in the quieting of critics who “believed that the empowerment of Indigenous peoples would disrupt a solid industry. It did not happen.”

According to Coates, R v. Marshall represents one of the most important Indigenous treaty rights and natural resources cases in Canadian history. It enshrined the notion that treaties dating back to the 18th century hold continuing importance – a precedent which would come to inform future treaty rights disputes.

Due in part to government action, subsequent negotiations from First Nations, and a revitalization of economic activity within local communities, the change brought on by Marshall was both manageable and ultimately positive. The prosperity of the region increased, creating a positive shift in the economic prospects of Indigenous and non-Indigenous people alike. Moreover, it helped provide the capital necessary to rebuild and improve local communities, and lead to spinoff business development opportunities.

As a result of the decision, the report finds that “more Mi’kmaq and Maliseet people are working. Community incomes are up, in some instances dramatically…. Onshore investments are expanding, as is general business development. Fishing operations transfer millions of dollars a year to First Nations governments, paying for numerous community upgrades, services, and Indigenous programs.”

The ruling also carried serious implications for how Indigenous people perceive Canadian legal and political institutions. The Marshall decision “demonstrated to First Nations people in the Maritimes that the Canadian legal and political system could protect and serve their interests,” writes Coates. “Indigenous peoples in Canada had long since lost faith in the colonial and paternalistic governance systems, which had marginalized them for generations.”

According to Coates, the past 20 years since Marshall have resulted in a wide range of important benefits for the region, including:

Despite the positive impacts of Marshall, there are still serious and sustained problems facing Indigenous peoples in Canada, including the Mi’kmaq and Maliseet communities in the Maritimes who still face barriers to opportunity. Marshall resolved only some of the disputes and claims, and there are many more outstanding issues for First Nations, governments, and the courts to navigate.

That being said, as Coates writes, the Marshall decision shows that “Indigenous treaty and legal rights matter and that the battle for justice through the Canadian courts can produce real and lasting benefits for First Nations peoples.”

To learn more, read Coates’ full report, The Marshall Decision at 20: Two Decades of Commercial Re-Empowerment of the Mi’kmaq and Maliseet.

Ken Coates is MLI’s Munk Senior Fellow in Aboriginal and Northern Canadian Issues. He is the Canada Research Chair in Regional Innovation in the Johnson-Shoyama Graduate School of Public Policy at the University of Saskatchewan.