in In the Media, Indigenous Affairs Program, Latest News
Reading Time: 2 mins read
A A

A recent report from the Macdonald-Laurier Institute that makes the case for provinces sharing revenue from natural resources with First Nations has made a splash in the media world. 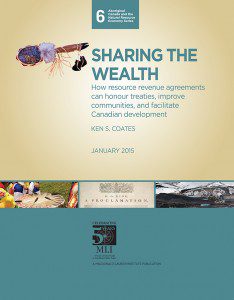 The paper, authored by MLI Senior Fellow Ken Coates, argues that giving Aboriginals a portion of resource revenues is an ideal way to compensate them for use of their lands while also winning support for natural resource development projects.

Globe and Mail columnist Gary Mason, in an item published Friday, praises the paper. He calls the argument “well-reasoned” and says Coates is correct in saying there are “a variety of moral, legal, political and economic reasons” for proceeding with resource revenue sharing.

Mason acknowledges that there are many legitimate arguments against resource revenue sharing but says “they are not enough on their own to refute revenue sharing as sensible public policy”.

He believes that it won’t be long before many provinces share Coates’ opinions.

“As Mr. Coates points out, either through negotiations or legal action, resource revenue sharing will soon be commonplace in Canada”, Mason writes.

The idea of sharing a portion of the tax revenue that comes from natural resource development might have seemed like a radical notion only a few years ago.

But, Coates told the Saskatoon StarPhoenix, times have changed.

“Some people get nervous about it, (but) there are a whole bunch of good reasons to do it”, Coates told the paper.

Coates was also scheduled to speak with John Gormley Live about the paper, titled “Sharing The Wealth: How resource revenue agreements can honour treaties, improve communities and facilitate Canadian development”, on Monday, Jan. 26.