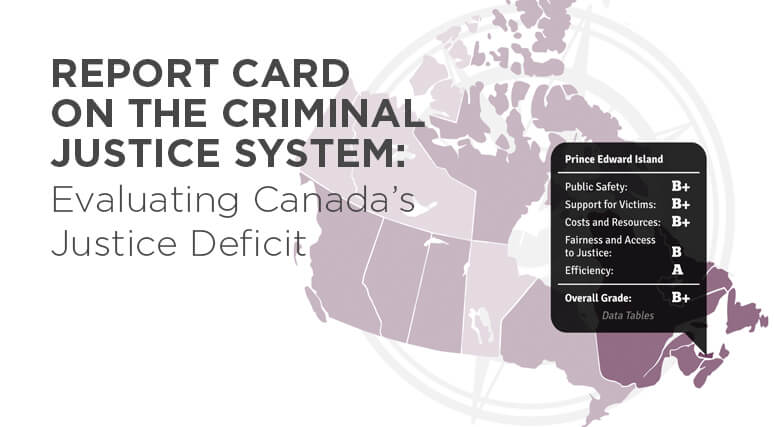 OTTAWA, Sept. 21, 2016 – Canada is suffering from a “justice deficit” – a large and growing gap between the aspirations of the criminal justice system and its actual performance.

That’s the main conclusion from MLI’s inaugural Report Card on the Criminal Justice System. Following an extensive data-gathering effort, authors Benjamin Perrin and Richard Audas have rated the provincial and territorial justice systems according to public safety, support for victims, cost and resources, fairness and access, and efficiency. 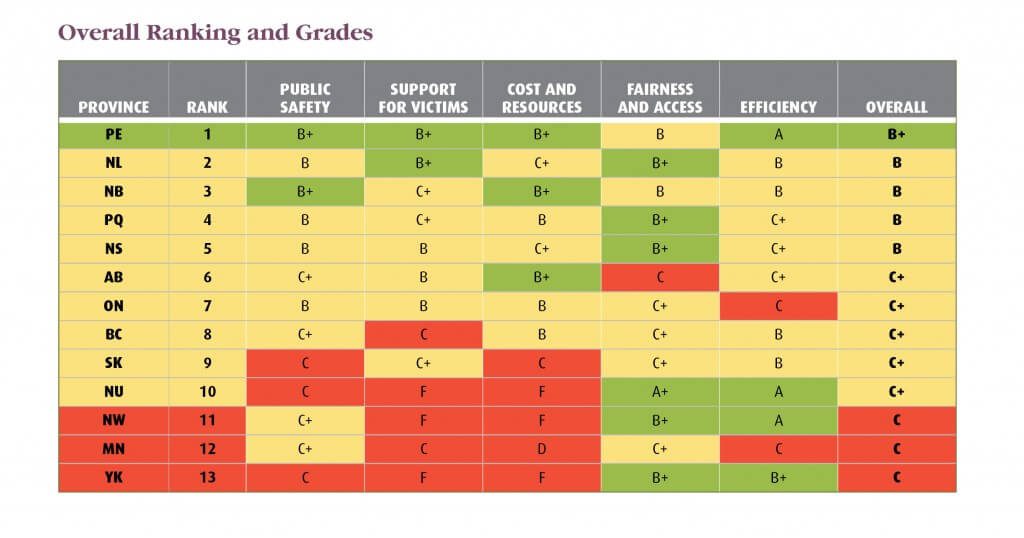 The report finds that, with few exceptions, our justice system is slow, inefficient, and costly.

“It is our hope that this first criminal justice system report card will generate tough questions for the many actors responsible for administering the justice system in each of these jurisdictions, enhance the collection of key data on its performance, and spur much needed reform”, write the authors.

The Supreme Court sent a similar message in its July 8, 2016 decision in R v. Jordan when it threw out drug trafficking charges from British Columbia; more than four years had elapsed from when the accused was charged to the conclusion of the trial. In its decision, the court decried what it called a “culture of delay and complacency”.

But until now, the extent of inefficiency and underperformance in the Canadian criminal justice system has never been fully assessed.

The Macdonald-Laurier Institute Report Card on the Criminal Justice System aims to enhance accountability and transparency with a view towards its reform and ongoing improvement for the benefit of all Canadians. The authors assess each province and territory’s criminal justice system using data averaged over the most recent years and quantitative statistical methods.

This process revealed excellent results in certain jurisdictions on some key metrics, but some appalling failures in other instances such as excessive delays in time to trial, inadequate support for victims of crime, large proportions of cases stayed or withdrawn, very high crime rates in some jurisdictions, poor rates for solving crimes, soaring costs of policing, and disappointing rates of Aboriginal incarceration.

There was a wide degree of variability on every metric. And while there are some regional trends, some provinces and territories do noticeably better or worse within their respective regions.

The Atlantic provinces and Quebec generally scored better than the Western provinces and the territories. Perhaps surprisingly, some larger and more prosperous provinces such as Ontario and British Columbia fared relatively poorly, with C+ grades and significant areas needing improvement. Every jurisdiction has room for improvement in reaching some or all of the core objectives of the justice system, and in numerous instances, urgent reform is required.

A few of the highlights from the report cards for each province and territory are:

“Canadians deserve a constructive response from those responsible, including the police, Crown prosecutors, courts, governments, corrections authorities, victim services officials, and others”, write Perrin and Audas. “As has been said, it is not a legal system that we need, but a justice system”.

Benjamin Perrin is an Associate Professor at the University of British Columbia, Peter A. Allard School of Law and a Munk Senior Fellow at the Macdonald-Laurier Institute for Public Policy. He is a Faculty Associate at the Liu Institute for Global Issues and the Peter Wall Institute for Advanced Studies.

Richard Audas, Ph.D. is an Associate Professor of Health Statistics and Economics at the Memorial University, Faculty of Medicine.