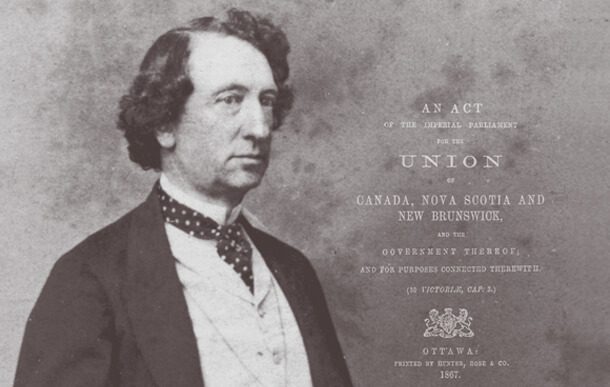 This entry in the Confederation Series shows John A. Macdonald as the indispensable politician who brought allies and enemies alike to establish Confederation.

OTTAWA, June 22, 2017 – The Macdonald-Laurier Institute is pleased to showcase the fifth paper of its Confederation Series, written by Munk Senior Fellow Alastair Gillespie.

This paper examines John A. Macdonald’s role as the indispensable politician who made Confederation possible. Many had dreamed of Confederation, others had long fought for constitutional reform, but only the resourceful Macdonald managed to achieve it through an extraordinary coalition deal – making his record an elegant defence of the importance of good practical politics in delivering real change.

Long resisting demands for constitutional change, Macdonald employed a subtle and distinctive political strategy to deliver confederation. Calling the constitution a “national, by no means a party question,” likening it to the British Parliament’s abolition of the slave trade, Macdonald called for constitutional issues to be debated on their merits, and for change to come only when the issue was “ripe.” As the Gillespie comments, this “Burkean strategy of a youthful ‘Old Tomorrow’” ultimately delivered Canada’s new constitution.

The paper highlights Macdonald’s desire to form a strong Canadian Union as his core contribution to Confederation. Gravely concerned by the American Civil War, Macdonald urged Canadians to form a real union, “one people and one government, instead of five peoples and five governments, with merely a point of authority connecting us to a limited an insufficient extent.”

Even before Confederation, Macdonald shaped Canada’s national character by resisting extremism and establishing a brand of moderate government that has endured. In partnership with his great political friend George-Etienne Cartier, they governed Canada together, practising the politics of the whole. In the Confederation debates of 1865, Macdonald called for French-Canadians to be treated “as a nation,” commenting that Canada for many years had already had “a federal union in fact,” if not in name.

Relating the famous (and often personal) antagonism between Macdonald and George Brown, his long-standing political opponent in Upper Canada, ultimately the paper recounts the Great Coalition of 1864, joining Reformers and Conservatives to deliver Confederation together. For some years Brown had offered to support any government pledged to constitutional change – it was Macdonald’s supreme accomplishment to accept the offer, and to make Confederation practical politics for the first time.

150 years on from Confederation, the Union which Macdonald formed has endured – including under the six majority governments he formed. Canadians looking to preserve that union will find much to inspire within. “If I had any influence over the minds of the people of Canada, any power over their intellects, I would leave them this legacy,” Macdonald said. “‘Whatever you do, adhere to the Union – we are a great country and shall become one of the greatest in the universe if we preserve it; we shall sink into insignificance and adversity if we suffer it to be broken.”

Alastair Gillespie is an MLI Munk Senior Fellow and a capital markets lawyer in the London office of a large New York-based international law firm. Prior to his legal career, Alastair was Special Assistant to the Hon. A. Anne McLellan, Deputy Prime Minister of Canada and Minister of Public Safety and Emergency Preparedness.