Terrorism attacks at the Ataturk Airport in Istanbul may have consequences for Turkey’s allies. That civilians were targeted, rather than security forces, suggests that ISIS may have planned the attack.

Christian Leuprecht, a Senior Fellow with the Macdonald-Laurier Institute, points to the broader international context of the tense relations between Turkey and Russia.  “Anything that directly affects security within Turkey has broader repercussions for the Western military alliance and its members, including Canada,” he says to CTV News following the attack in Istanbul.

CBC Vancouver interviews Christian Leuprecht about the Istanbul bombing (cue in to 3:30), explaining why civilians at airports have become targets. Additional interviews with Ian Hanomansingh are also available on CBCNN. 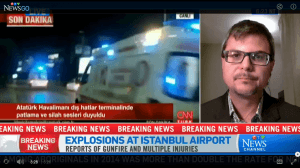 Indigenous support for development is being heard: Ken Coates in Inside Policy

In the aftermath of Brexit, Canada’s founding inspires: Alastair Gillespie in Inside Policy

In the aftermath of Brexit, Canada’s founding inspires: Alastair Gillespie in Inside Policy