In an excerpt from his new book, MLI Senior Fellow Ken Coates examines the lasting impact of the Idle No More movement 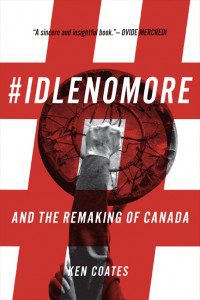 OTTAWA, April 24, 2015 – For several months starting in 2012, the Idle No More movement transported Aboriginal affairs to the top of the political agenda. Since then, the grievances for which the movement sought attention have for many Canadians faded into the background.

But that does not mean that Idle No More is a spent force, writes Macdonald-Laurier Institute Senior Fellow Ken Coates in a new commentary.

The commentary is an excerpt from Coates’ new book, #IdleNoMore and the Remaking of Canada, released by the University of Regina press in April 2015.

The Idle No More movement first grabbed headlines more than two years ago, when thousands of First Nations people and their supporters took to the streets in protest over conditions for Aboriginals that in many cases were far below what other Canadians have come to expect. In this excerpt, Coates explores the history of abuse and exploitation that led to what has been an amazingly optimistic and powerful expression of Aboriginal unity and engagement.

Many Canadians have long since forgotten about the movement. But Coates says the movement’s legacy continues today.

“The combination of deeply entrenched grievances, sustained prejudice, and serious community difficulties, with the recent significant achievements and important victories of real re-empowerment has proven to be an extremely powerful mix”, he writes.

For more information or to arrange an interview with Ken Coates, please contact Mark Brownlee, communications manager, at 613-482-8327 x105 or email at mark.brownlee@macdonaldlaurier.ca.

Collectivists shouldn’t tell us how to spend our money: Cross in the Post

Collectivists shouldn’t tell us how to spend our money: Cross in the Post