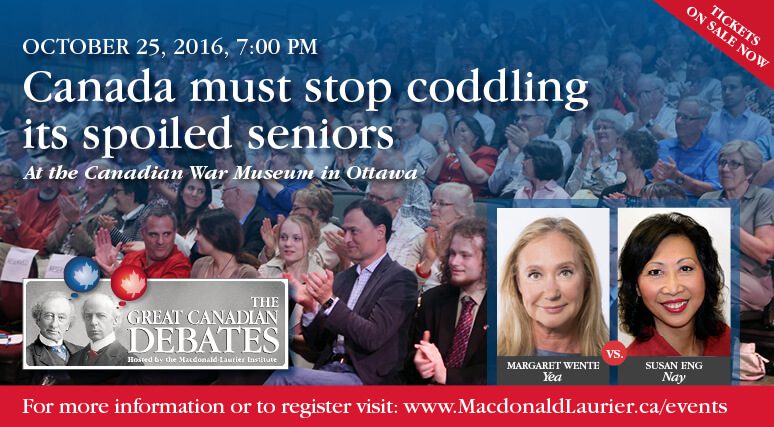 OTTAWA, Oct. 24, 2016 – A prominent newspaper columnist and a well-known former seniors’ rights advocate will square off over whether Canada panders too much to its seniors the latest entry in the Macdonald-Laurier Institute’s Great Canadian Debates.

On Oct. 25, 2016 at the Canadian War Museum in Ottawa, Globe and Mail columnist Margaret Wente will argue in favour of the resolution: “Canada must stop coddling its spoiled seniors”.

Susan Eng, a lawyer and former executive vice-president of the Canadian Association of Retired Persons, will argue against.

We in Canada have of course always had the utmost respect for our elders. But with a wide array of tax breaks, discounts and privileges, some would say this increasingly wealthy and powerful demographic has had it too good for too long. Politicians know that seniors vote, and competition to woo a growing population of retirees is always fierce at election time.

Others would argue that after all they have done for their country, seniors deserve to get something back, and many of them are still among the most vulnerable Canadians.

So who is right, is it time for Canada to stop coddling its spoiled seniors?

Margaret Wente is a columnist with the Globe and Mail.

Susan Eng is a lawyer and seniors’ rights advocate.