Great Canadian Debates in Toronto, April 18: Has the terrorist threat been exaggerated? 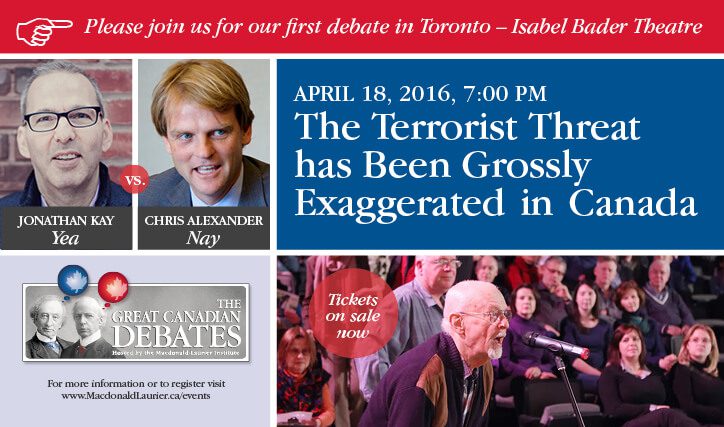 OTTAWA, April 12, 2016 – Has the terrorist threat been exaggerated?

Jonathan Kay and Chris Alexander will hash out that question as part of the first Great Canadian Debate to take place in Toronto, happening on April 18, 2016 at the Isabel Bader Theatre at the University of Toronto.

If you are a member of the media interested in covering this event, please contact Mark Brownlee at 613-482-8327 x105 or mark.brownlee@macdonaldlaurier.ca.

Many would argue that Canadians have been naïve about the extent of the danger, and we have not done enough to protect ourselves from violent radicals who would destroy our very way of life. They would say we must do more to counter the insidious rise of terrorism around the world.

Others say that security forces have largely contained the threat, and point out that the danger to individual Canadians, or other Westerners for that matter, from terrorism is miniscule, compared to such mundane hazards as traffic accidents and common diseases. They would say that the terrorist attacks that get so much media attention pale in comparison to other challenges the world has faced throughout history.

Kay, the editor-in-chief of Walrus Magazine, will argue in favour of the motion “The terrorist threat has been grossly exaggerated in Canada”. Alexander, a former Canadian diplomat and Minister of Citizenship and Immigration, will argue against.

Jonathan Kay is Editor-in-Chief of The Walrus, a columnist with the National Post, a panelist on CBC’s The National, and the author of several books, including “Among The Truthers”.

The Hon. Chris Alexander, P.C is a former Canadian diplomat who served from July 2013 until November 2015 as Canada’s Minister of Citizenship and Immigration.

Why Donald Trump is wrong on trade deficits: Sean Speer in the Financial Post

Why government budgeting should be regulated like the banks: Brian Lee Crowley and Sean Speer in Sun papers

Why government budgeting should be regulated like the banks: Brian Lee Crowley and Sean Speer in Sun papers