Give us good measure: Assessing the value of federal funding for First Nations government 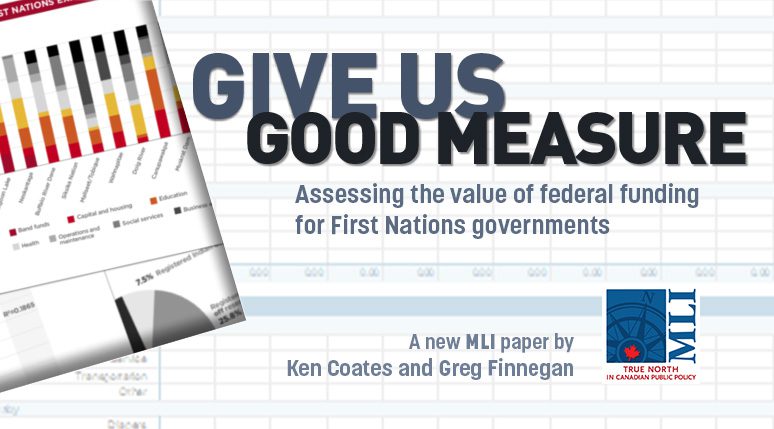 Federal funding is neither a “gift” to the community nor a recognition of their “special status.” Most of the money covers costs associated with education, health care, social housing, and basic infrastructure – federal government duties that are discharged in other jurisdictions by provincial and municipal governments or federal agencies. The myth of government generosity to First Nations remains pervasive in Canada but is a severe misrepresentation of the financing of Indigenous communities.

This paper examines the finances of a sample of 12 First Nations from across Canada, using their published audited financial statements to describe the inequality in First Nation government financing in Canada. Our project focuses on eight rural and remote communities, including Wabigoon, Neskantaga, Wahnapitae, Doig River, Canupawakpa, Siksika, Buffalo River, and Muskrat Dam, alongside the more urban Indigenous communities of Kwänlin Dun (Whitehorse), Tsawwassen in the Lower Mainland of BC, Moosomin and Cowessess in Saskatchewan, the Maliseet Nation at Tobique bordering Perth/Andover in New Brunswick, and the Membertou in Cape Breton.

First Nation audits should not be seen as a Crown-imposed duty, but as a duty of First Nation governments and administration to their members to document revenues, expenditures, and assets and liabilities. Audited financial statements give confidence to members about how the First Nation’s money was spent. An audit is an independent review of a Nation’s financial statements or an outside look at a First Nation’s finances. The audited statement not only fulfils the fiduciary responsibility of chief and council and the government with its people, but it is also an essential financial document for future fundraising initiatives, financial and economic development planning, and self-assessment.

While accounting standards and auditing policies help to standardize audited accounts and best practices, not all First Nations organize their government management systems in the same way, nor do all report on the same administrative categories. This inconsistency is a major limitation. There are two core issues at play: the sums of money (and conditions attached thereto) available to First Nations governments and their ability to manage these funds appropriately, a formidable challenge given the small scale and limited professional capacity of most First Nations.

However, society has come to expect transparency and full disclosure from governments and from publicly traded corporations. As First Nations increase their economic role in society, it is likely that society will increasingly expect that their financial reports will also be available.

Strong, well-organized, and thoughtful First Nations governments are now an essential condition for First Nations well-being. It is clear that effectively managed First Nations understand treaty and legal arrangements, work effectively with federal, provincial, and municipal authorities, and approach commercial activities with a keen sense of business and an Indigenous approach to maximize the socio-economic benefits of successful companies. This paper reinforces the importance of effective governance to community well-being and revitalization.

A growing number of First Nations have skillfully worked through the complex opportunities and challenges and many others are looking for lessons from their experiences. That is one of the most hopeful prospects for steady improvements in Indigenous well-being in the years and decades to come.

Canada must seize this chance to help Uyghurs escape genocide: Sarah Teich and David Matas for Inside Policy