From Rehabilitation to Recruitment 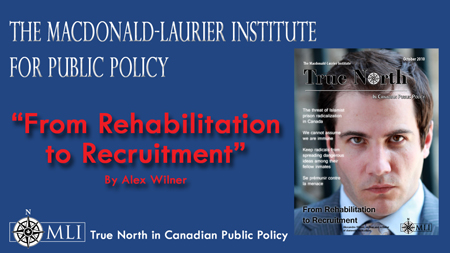 From Rehabilitation to Recruitment, by Alex Wilner.

Getting ahead of prison radicalization, by Alex Wilner, Globe and Mail, October 18, 2010.

Canada has a problem with home-grown radicalism. It comes from many sources and when it crosses the line from advocacy to violence, law enforcement steps in. People are arrested, tried and, if convicted, sent to jail. Unfortunately what looks like a solution to most people can be the start of another problem. Prisons are a fertile recruiting ground for radicals and terrorists in many other countries. If we do not want to jail one terrorist only to release three, we need to take preemptive action based on the experiences of our friends and allies.

At first glance, those incarcerated for plotting terrorism might seem very different from members of the general prison population. But in Britain, France, Spain and other European countries, and more recently in the United States, authorities have encountered a worrying trend. Individuals arrested for terrorist violence often have prior criminal records for non-terrorism offenses and, moreover, had their first serious encounter with radical ideas while behind bars. Ideologies that foment political violence can offer structure and meaning to people with disorderly lives while exploiting their sense of alienation and willingness to engage in acts of violence. Allowing these ideologies to spread within our prison system is asking for trouble.

This paper does not take an alarmist view of the situation within Canada. But it does sound an alarm. We have only just begun incarcerating Canadian terrorists in significant numbers and the problem of prison radicalization is not yet a serious concern. But our allies have found that when steps are not taken to prevent it, prison radicalization can occur on a scale that presents a major security dilemma. From failed British “shoe bomber” Richard Reid to London Underground bomber Muktar Said Ibrahim and from Madrid train bomber Emilio Trashorras to Californian radical Kevin James, the biography of a petty thief or drug peddler turned jihadi is all too familiar to international law enforcement agencies. If we do not act, it can happen here. Fortunately, time may be on our side.

If we want to avoid this problem we cannot persuade ourselves that we are immune to the danger, that our geographical location, benign foreign policy, or multicultural society insulate us from the threat of terrorism or from various sorts of radical ideologies. We have already witnessed terrorist plots from a variety of sources, from the Air India bombing to Tamil Tiger fundraising and, more recently, the Toronto 18 and an alleged plot centred in Ottawa. Canadians are also threatened by foreign organizations like al Qaeda and al Shabab, and increasingly, are targets of terrorist recruitment. As Canadian terrorists go to jail, other inmates may represent an important and vulnerable population.

While the paths to radical beliefs and terrorism are complex and often idiosyncratic, we know some of the factors involved in the prison radicalization process and the typical profiles of would-be terrorist recruiters. Combatting radicalization in Canadian prisons will require a multifaceted strategy that isolates recruiters, denies extremists access to prisoners, and excludes radical religious service providers and extremist texts from prison. We also need to familiarize prison staff with radicalization, ensure that perceptions of discrimination that sustain radical beliefs are stamped out within the prison system, and establish a de-radicalization strategy that can help Canadian terrorists disengage from violence and properly reintegrate into society. By learning from our allies’ experiences, we can reduce the likelihood that terrorists will emerge from our prisons in larger numbers than they entered them.

That prison radicalization is not yet a problem in Canada is cause for quick action not complacency. Our government should learn from the successes and failures of others to get ahead of the issue. Preventing radicalization and recruitment in (and out) of prison is the best way to keep Canadians safe from terrorism.